Chimpanzee is star of second coin in primate series 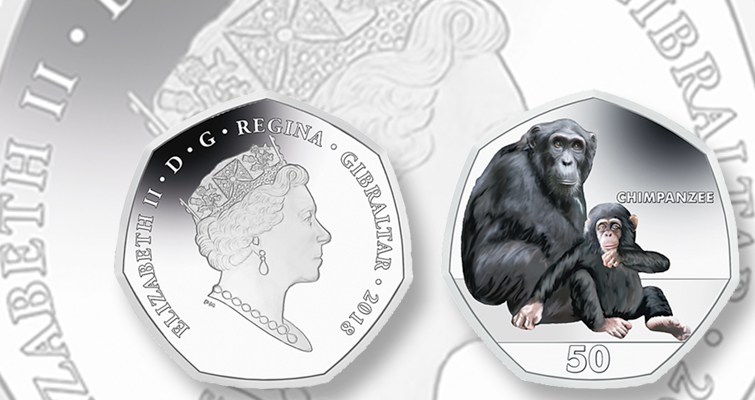 The chimpanzee coin is the second in this four-coin series. The barbary ape, red colobus monkey, and baboon are also featured.

The second coin in the British Pobjoy Mint’s colorized primate series from the Government of Gibraltar, featuring an adult chimpanzee with an infant, is now available.

The chimpanzee — often thought to be the closest relative to humans — is listed on the International Union of Conservation of Nature Red List as an endangered species. Habitat destruction, poaching and disease threaten its population.

According to a Pobjoy Mint press release, “… the coin will hopefully highlight the fact that we are losing some of our amazing primates and provoke some thought into saving these beautiful animals.”

The Pobjoy Mint release states the common chimpanzee can be found in northwest and central Africa and is a species of the great ape. It lives in groups of 15 to 150 individuals, but large groups split into much smaller groups to hunt for food during the day. The species lives in a male-dominated and strict hierarchy, which means that disputes can generally be settled without the need for violence.

The Diamond Finish Chimpanzee copper-nickel 50-penny coin weighs 8 grams, measures 27.3 millimeters in diameter and has a mintage limit of 7,500 pieces. The coin is available from the Pobjoy Mint’s website priced at $14.95. Also available is a magnetic collector’s album, priced at $7, which provides information about the individual primates.

The Barbary ape is featured on the first coin released in April. The red colobus monkey and baboon will be featured on the two additional coins that complete the series, which will be released later this year.