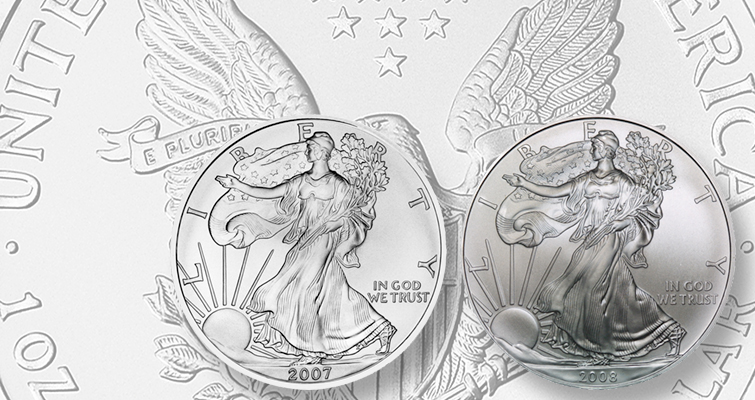 The United States Mint made design modifications to the silver American Eagles in 2008. Look closely at the lettering. 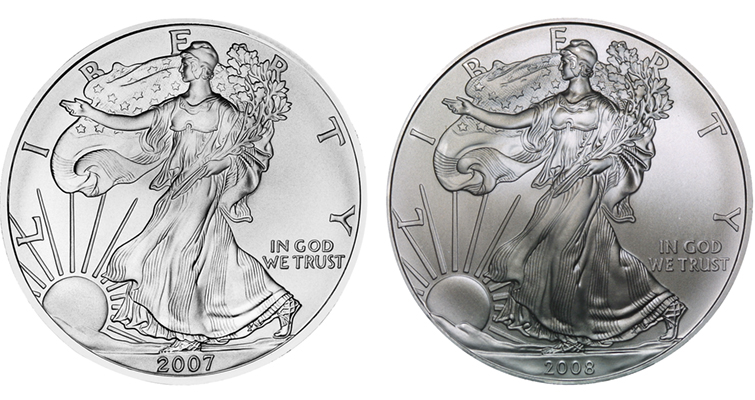 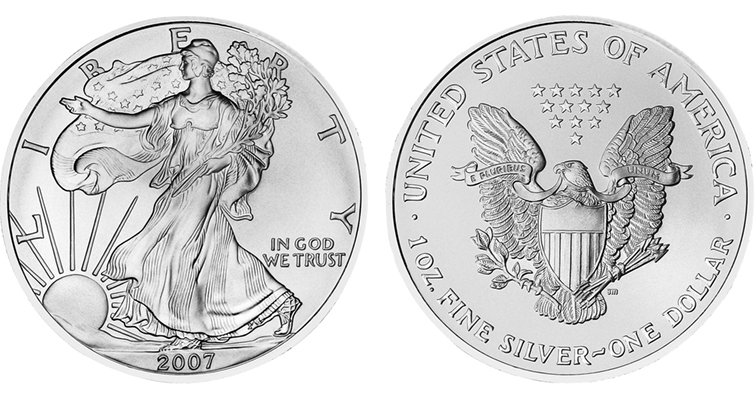 The U in UNITED on the reverse and in TRUST on the obverse of this 2007 silver American Eagle bullion coin have no tail extending from the right side of the letter. This is the style intended for the 2007 coins. 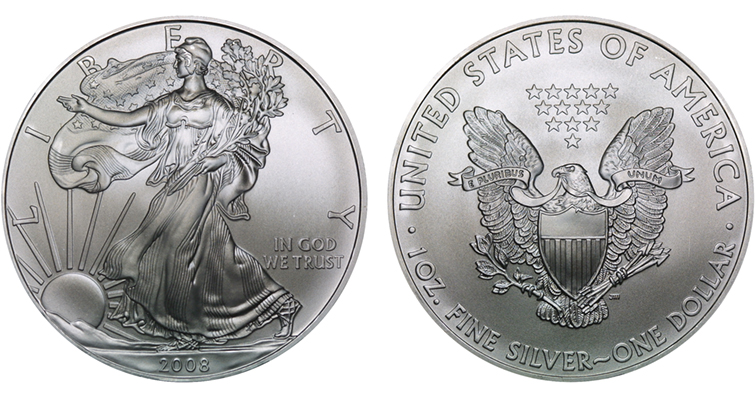 The U in UNITED on the reverse and in TRUST on the obverse of this 2008 silver American Eagle bullion coin both have a tail extending from the right base of the letter. Both side of this coin exhibit the correct, updated lettering for 2008 coins. Note also differences between other letters from 2007 to 2008, such as the L, the E and the Y.

In 2008 the Mint modified the reverse of the silver American Eagle, which resulted in some being mistakenly minted with the old 2007 reverse. Has anyone noticed that the Mint also modified the obverse in 2008?  If you look on the drapery at the letter L in LIBERTY you will notice that the lines on the drapery on the 2007 extend to the upper bottom of the letter L and on the 2008 the lines extend to the lower bottom of the letter L. Evidently the Mint modified the obverse letters also. I’ve Googled this and can find no info about this obverse change in 2008. Could there be some 2008 obverse errors out there we don’t know about?

Coin World reported on the changes to the obverse and reverse lettering on the 2008 American Eagle silver dollars — concurrent with the introduction of new digital manufacturing techniques in die production — in January of that year, so those differences have been known to the collecting community since then. However, the changes to the reverse have received greater attention because the U.S. Mint mistakenly produced approximately 47,000 Uncirculated 2008-W American Eagle silver dollars using the reverse type for 2007 and not the correct 2008 version.

Mint officials say it is not possible for a 2007 obverse design to bear lettering that is of the style used in 2008. Here’s what the technology specialists at the Philadelphia Mint had to say in response to our inquiry on behalf of the reader:

“2008 was the year we introduced digital manufacturing techniques on the obverse and reverse. It is most evident in the lettering.

“Note the L and Y in LIBERTY. Unlike the reverse, the obverse has a date which defines the year of manufacture or release.

“As such, there is no possibility of having the digital artwork (as noted by the narrow lettering) of the 2008 on dies dated 2007.”