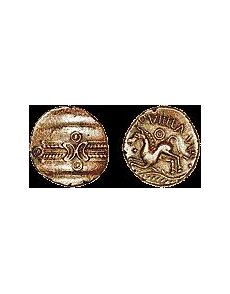 The highlight from the Matthew Rich Collection of Celtic Coins, which offered 182 coins from Celtic Britain, was the circa late first century B.C. to late first century A.D. gold stater struck for Dubnovellaunus, a ruler or rulers with the Trinovantes tribe.

Celtic Britain is an area of numismatics that, until the widespread expansion of metal detecting in the early 1990s opened the field to a wider audience, was rather limited, according to the catalog.