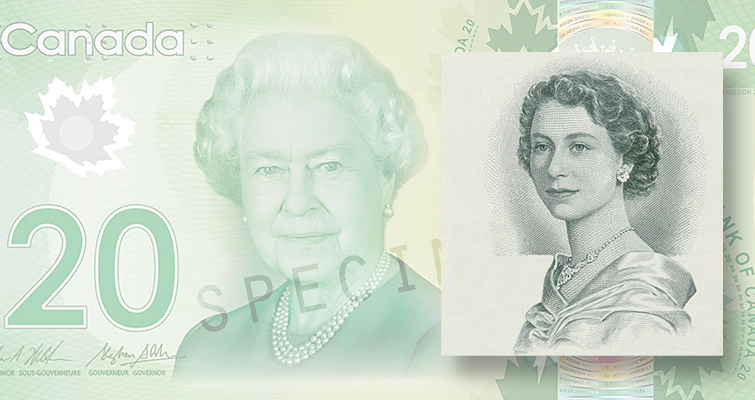 A new commemorative $20 note from the Bank of Canada celebrates the record reign of Queen Elizabeth II. The note employs the main design elements of the regular $20 note but also bears special commemorative devices in a window, including a crowned portrait of a young Elizabeth.

Images courtesy of Bank of Canada 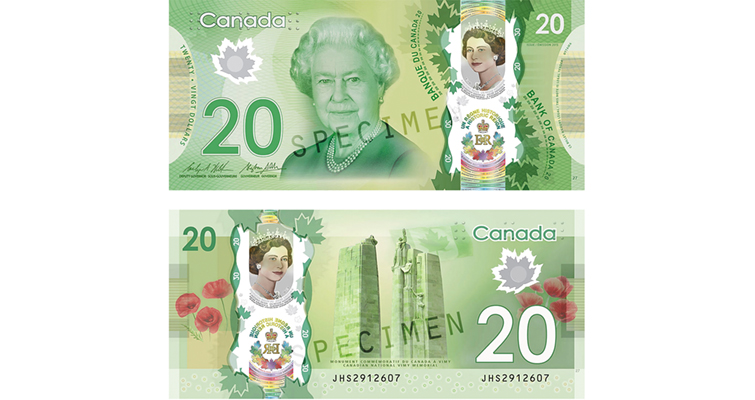 Here are both the face and back side of the $20 note from the Bank of Canada. The commemorative note shares the standard designs of the regular $20 note but features a commemorative portrait of the queen in the transparent window.

At an official ceremony on Sept. 9 in Ottawa, the Bank of Canada unveiled its long-awaited commemorative $20 bank note honoring Queen Elizabeth II. As of that day, her reign exceeded the 63 years, 216 days of her great-great-grandmother, Queen Victoria, making her the longest serving British monarch.

The commemorative note, of which 40 million will be issued, is similar to the current $20 note, with one distinct difference: its large holographic window contains a range of special design elements. One is a metallic portrait of a young Elizabeth, wearing a crown (tiara) for the first time on a Canadian bank note. The portrait is based on a 1951 image by Canadian photographer Yousuf Karsh originally for a postage stamp and modified for use by the Bank of Canada. It is the same photograph as was used, without the crown, on the 1954 series of bank notes and the 1967 commemorative note celebrating Confederation.

Below the portrait is text that reads A HISTORIC REIGN • UN RÈGNE HISTORIQUE repeated multiple times across the top, center and bottom of the window. This text appears sometimes in reverse, legible from the other side of the note. A garland of holographic maple leaves below the queen’s monogram represents Canada’s 13 provinces and territories.

Other design elements on the note are the same on both the regular series $20 note and the commemorative note: the large portrait of the queen, images on the back depicting the Canadian World War I Vimy Memorial, and an artistic rendering of poppies symbolizing remembrance and honoring Canada’s military.

This is the third Canadian commemorative note. The first celebrated the Silver Jubilee of King George V in 1935, and the second was for the 1967 centennial. The Bank of Canada has also announced that it will issue a commemorative bank note marking Canada’s 150th anniversary in 2017