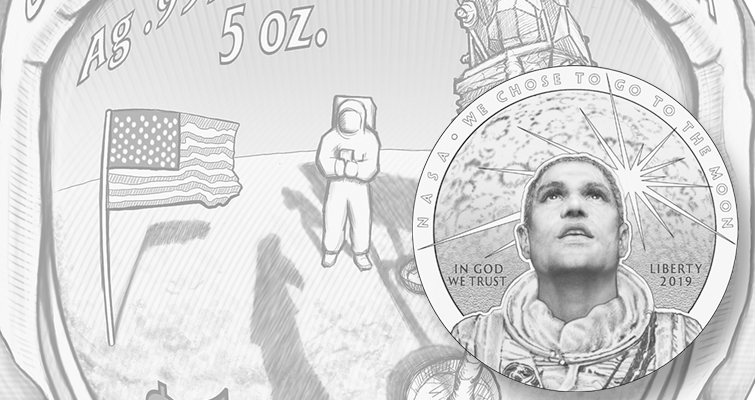 One of the finalist designs for the Apollo 11 50th Anniversary silver dollar depicts an astronaut looking up at the Moon, a symbolic personification of the focused and determined spirit of NASA. 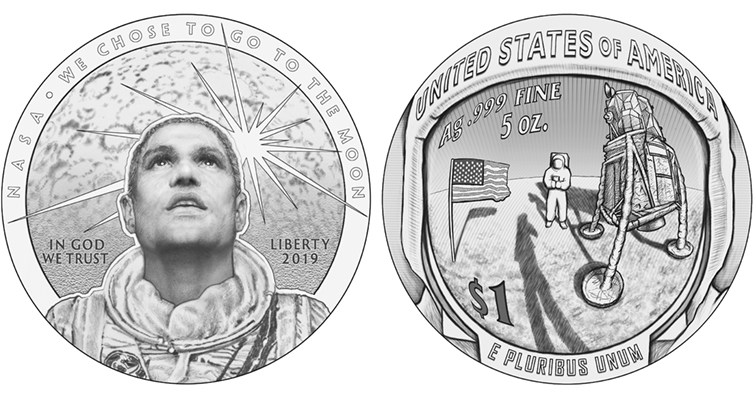 Whatever final design is selected for the concave obverse will be paired with the common convex reverse reflecting a close-up of the famous “Buzz Aldrin on the Moon” photograph taken July 20, 1969, that shows just the visor and part of the helmet of astronaut Buzz Aldrin, in which the visor has a mirrored finish and reflects the image of the United States flag and the lunar lander. 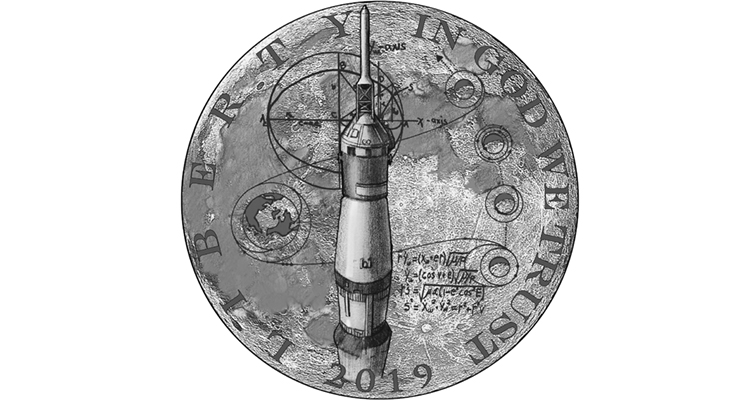 Finalist design shows a Saturn rocket against the Moon as the central obverse device. 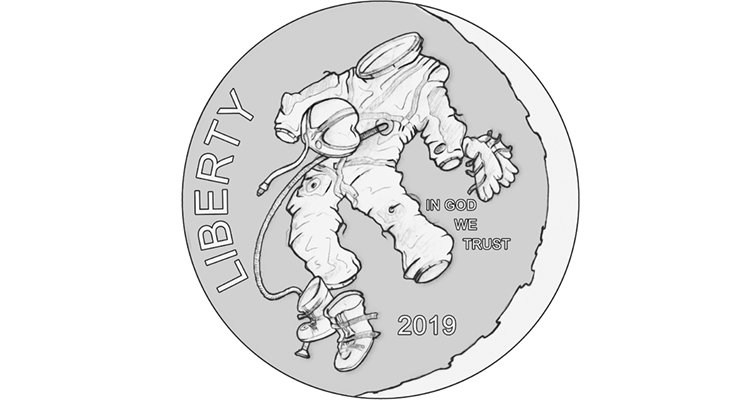 “From Space Shot to Moon Landing” design depicts the iconic space suit from the Mercury Space Program with the background of a crescent moon. The suit is arranged in a way as if to appear floating in a weightless environment. 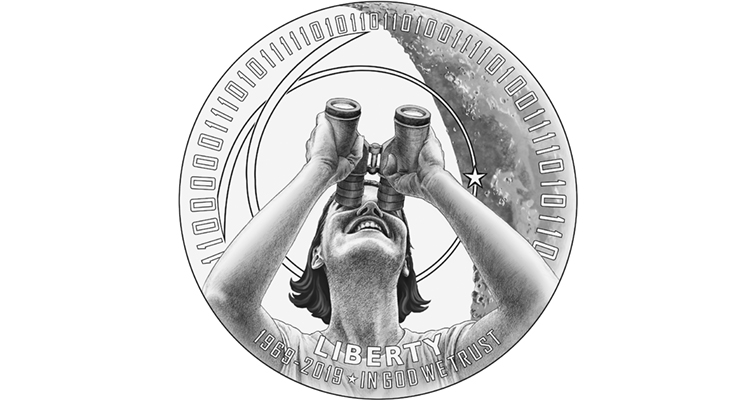 Design depicts a woman peering through binoculars with the Moon in the background, a star indicating the Apollo 11 landing site. The string of 1s and 0s is binary code that symbolizes the advanced technology that many dedicated people created and employed in order to land astronauts on the Moon and return them to Earth. 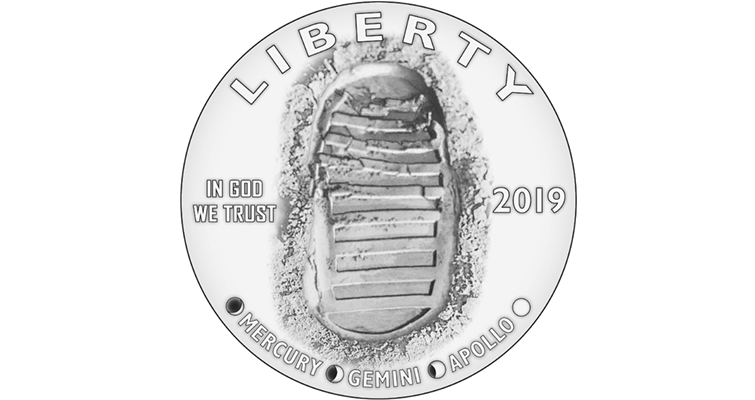 The central device of “MISSION ACCOMPLISHED” is a footprint on the lunar surface left during the Apollo 11 mission. 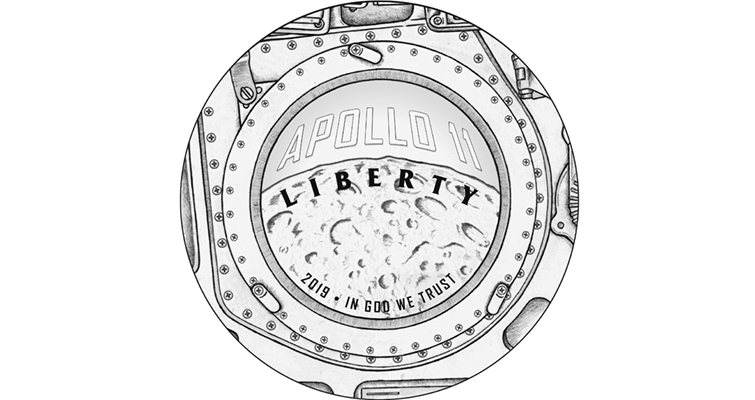 This design illustrates a view of the Moon through the window of the Apollo 11 Command Module hatch. 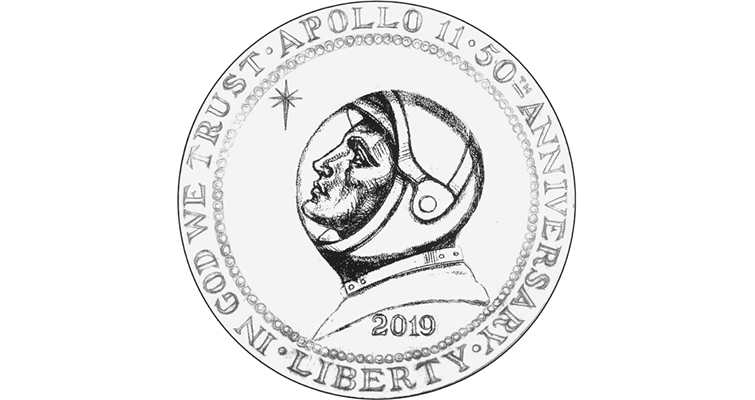 An astronaut is captured in this design representing “AD ASTRA PER ASPERA – To the stars through mighty effort.” 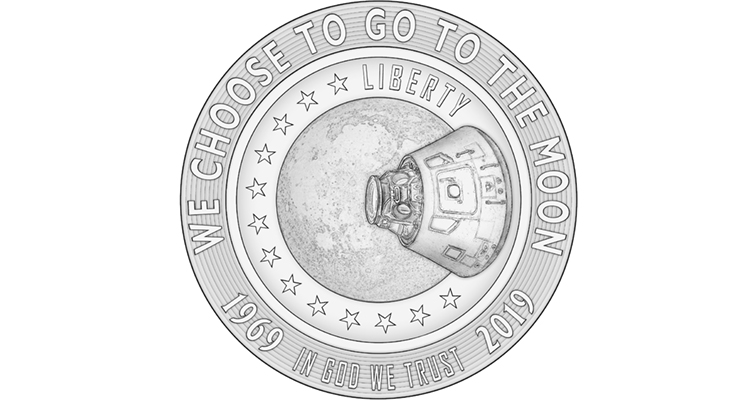 This design features the Apollo 11 Command Module, with the Moon in the background, circumscribed by 13 stars. The artist desired for the overall image to be suggestive of peering through the eyepiece of a telescope, a concave form that is meant to echo the obverse design’s concave surface. The phrase, “We Choose To Go To The Moon,” quotes President Kennedy from his 1962 speech at Rice Stadium in Houston, Texas. 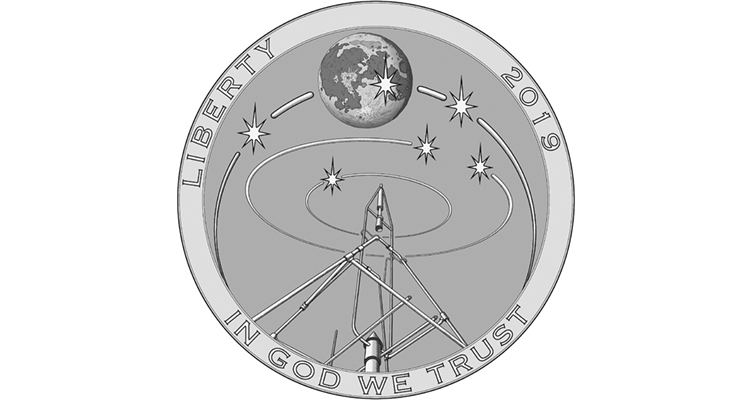 “VISION ... VOLITION ... VICTORY!” is a symbolic representation of America’s path to landing men on the Moon. The first American-made liquid fueled rocket, which is pointing to the future and Apollo 11‘s landing site on the Moon, represents the beginning of the technology and engineering that would be required to send men into space and to the Moon. 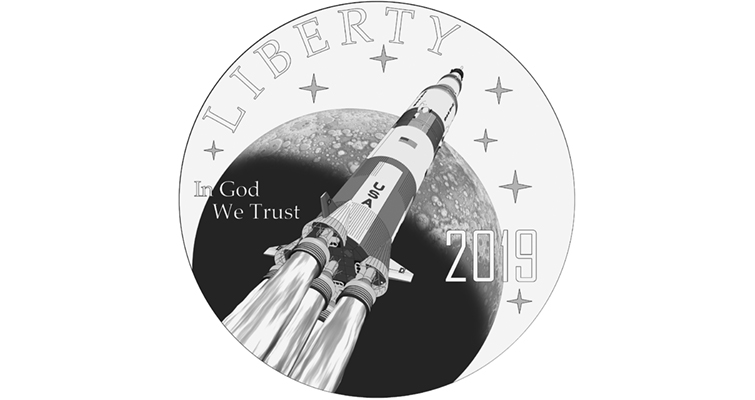 “363 feet of gleaming white metal thundered aloft on a bright summer morning, setting a new course for mankind. The powerful engines of the Saturn V reverberate throughout time, sending out inspiration to artists even today,” is the description of this proposed concave design. 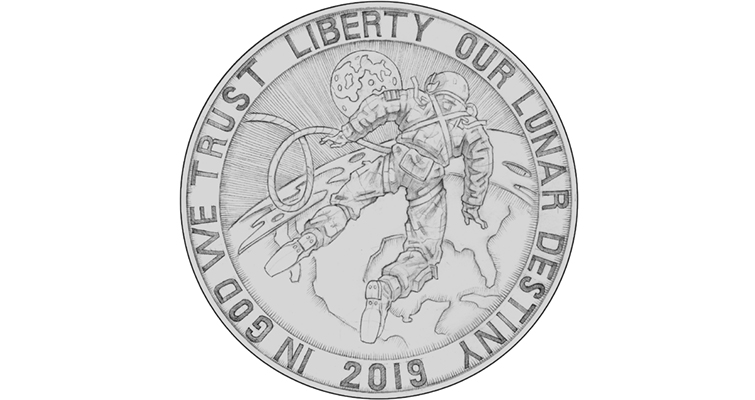 “Our Lunar Destiny” celebrates the choice to go to the Moon, proclaimed by President Kennedy in his speech at Rice University. The design pays homage to the pre-lunar historical contributions of the Mercury, Gemini, and Apollo space programs’ research, vision, and desire by advancing the technical knowledge necessary for a future Moon mission. 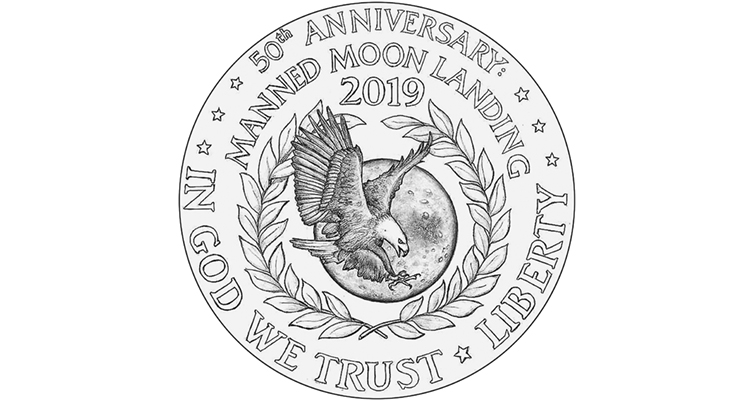 “The Eagle Has Landed”-themed design captures an American eagle in flight clasping laurel branches in its talons, with the Moon in the background. 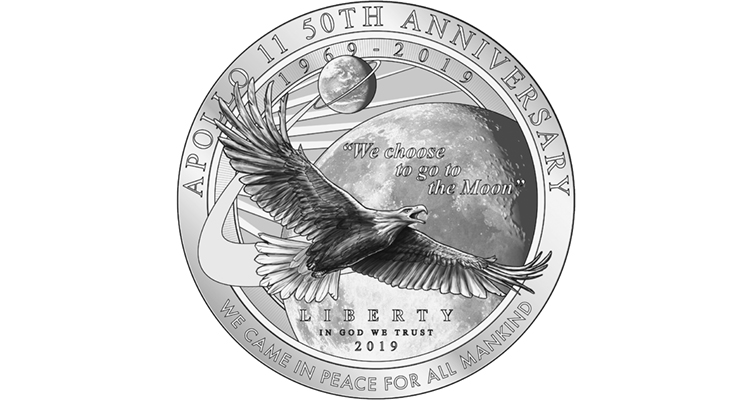 Another design depicts an American eagle soaring, with the Moon and the Earth in the background. Soaring to new heights, the eagle’s grand outstretched wings are a measure of the expansive goals and breadth of mobilization of the nation’s best minds and industries. Its wide-open mouth echoes President Kennedy’s bold call to action, “We choose to go to the Moon.” 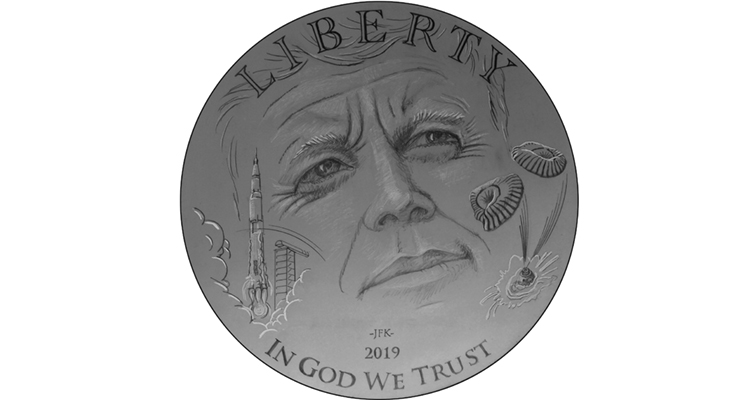 The intent of “And Return Safely To Earth” is to give tribute to the presidential vision that inspired our country to achieve in less than a decade perhaps the greatest achievement by all mankind. The scenes, rocket blast-off and splashdown, which frame President Kennedy's face, are also the two significant events that frame the actual landing represented on the common reverse. 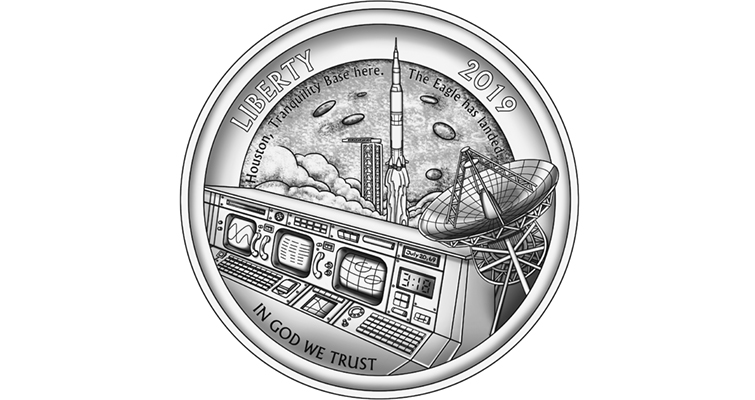 “The Heroes on Earth of the Apollo 11” praises all the talented scientists, engineers, and technical support people who worked hard to make the Apollo 11 mission possible. Inspiration for the mission control room came from the historic NASA mission control center in the Space Center Houston, Texas. 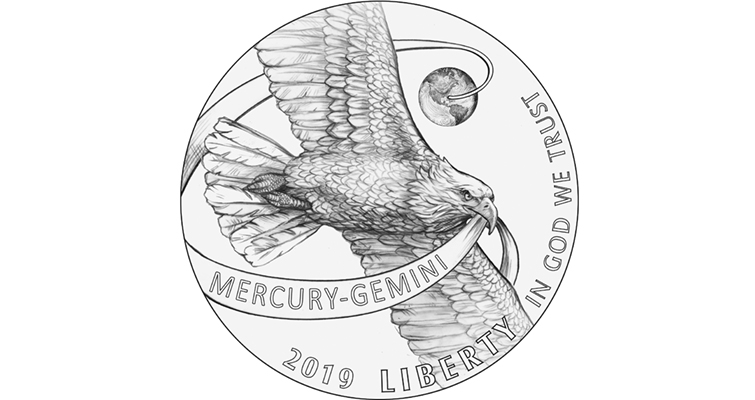 “The Eagle Will Land” depicts a determined eagle grasping a banner in its beak in tracing the trajectory of the Apollo 11 spacecraft to the Moon. The banner bears the names of the two NASA programs, Mercury (1958-1963) and Gemini (1961-1966) whose engineering innovations and successes led up to the manned landing on the Moon. 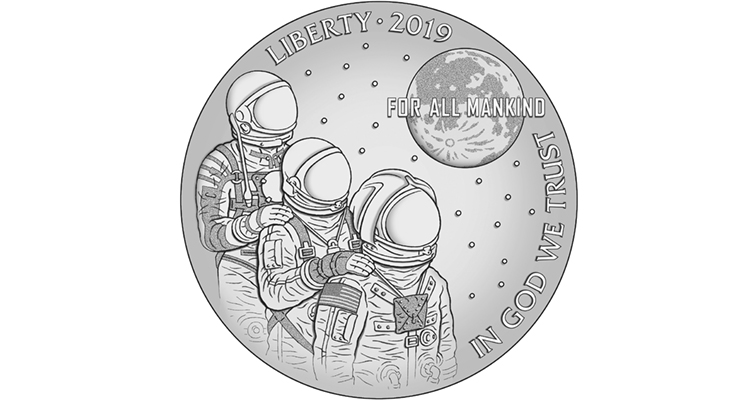 “On the Shoulders of Giants” illustrates three astronauts from the three programs, shoulder to shoulder. One is in a Mercury spacesuit, one in a Gemini suit and one in an Apollo suit (specifically a Block I spacesuit – discontinued after Apollo 1 – a somewhat unique and different look to complement the reverse of the coin that highlights Apollo 11’s classic Block II visor. The astronauts all look to the ultimate goal, the Moon, and the achievement, “For All Mankind.” 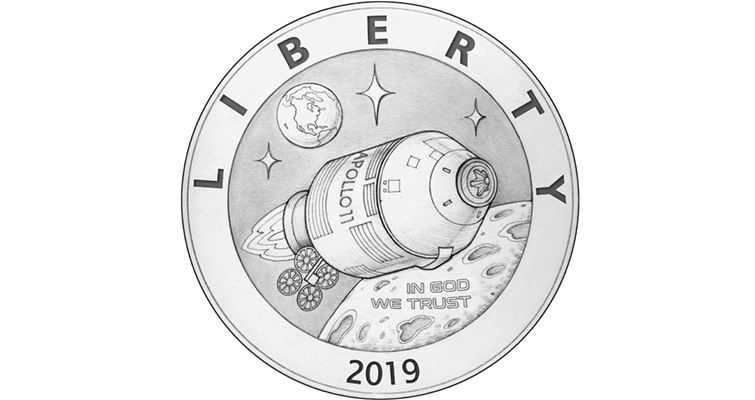 The Apollo Command Module in space and a rendition of the surface of the Moon and Earth is illustrated in this finalist design.

The public got its first look at designs for the common concave obverse for the four-coin 2019 Apollo 11 50th Anniversary commemorative coin program during the Oct. 18 meeting of the Citizens Coinage Advisory Committee.

The Apollo 11 coins are authorized under Public Law 114-292. The proposed common obverse for the gold $5 half eagle, silver dollar, copper-nickel clad half dollar and 5-ounce silver bullion coin was to be selected from among 18 proposed designs submitted during the second phase of a public design competition.

When given final approval by Treasury Secretary Steven Mnuchin or his designate, the adopted obverse will be paired with the common convex reverse.

The Commission of Fine Arts was slated to review the same 18 designs Oct. 19.

The design for the common reverse mandated under the enabling legislation was not part of the public design competition, but was executed by artists at the U.S. Mint.

The enabling act calls for:

During the Oct. 18 meeting, the CCAC was also to recommend a revised version of a proposed design for the reverse of the 2019 American Memorial Park quarter dollar for the Commonweath of the Northern Mariana Islands and discuss design concepts and themes for the five 2020 America the Beautiful quarter dollars and the lone 2021 coin reflecting the 56th and final coin in the 11-year series. 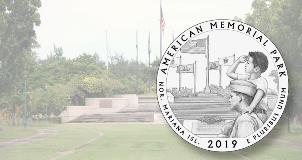