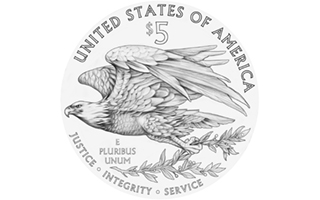 An eagle design originally considered for the reverse of the 2015 U.S. Marshals Service gold $5 half eagle has been recommended, with modifications, to replace the Heraldic Eagle currently on the reverse of silver American Eagles.

The Citizens Coinage Advisory Committee recommended April 8 a proposed design, with modifications, to replace the Heraldic Eagle reverse that has appeared on American Eagle silver coins since 1986.

From a list of 16 designs, culled from 44, depicting eagles considered for previous U.S. coin and medal programs, the advisory panel selected one that was originally submitted for possible use on the 2015 United States Marshals Service gold $5 half eagle, but was not recommended by either advisory panel for use in that program.

Several CCAC members indicated the recommended design is reminiscent of the eagle in flight on the reverse of 1836 to 1839 Gobrecht dollars.

The CCAC recommends that the U.S. Mint execute several designs based on their approved selection, but with modifications. It was recommended that the eagle be oriented to fly slightly upward; that the beak be modified so as not to be too close to the edge; that renditions be produced for consideration both with and without the olive branch, and both with and without arrows; and that appropriate inscriptions, to include the denomination and weight and fineness in silver, replace the inscriptions in the suggested design.

CCAC members stress that this is just the beginning of the process. Any designs rendered by the Mint's engraving staff based on the CCAC's direction would still need to be returned to the CCAC for review, and be reviewed by the Commission of Fine Arts before being sent to the Treasury secretary for final approval.

Meeting by telephone, the CCAC members also directed Mint officials to develop a proposal for a national art medals program that would enable the Mint's engraving staff to produce designs without artistic restrictions.