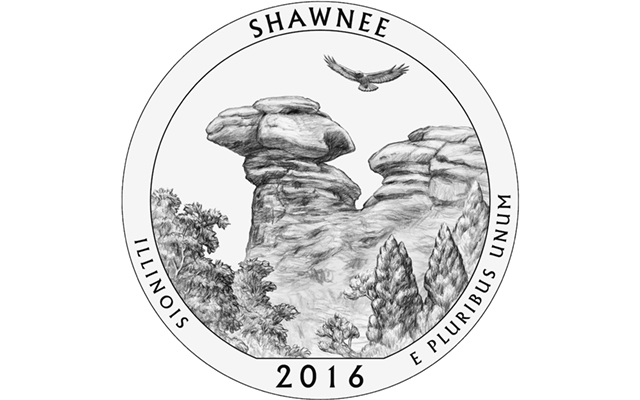 The proposed design the CCAC recommends for Illinois’ Shawnee National Forest quarter dollar depicts a close view of Camel Rock, with a red-tailed hawk soaring in the sky overhead. 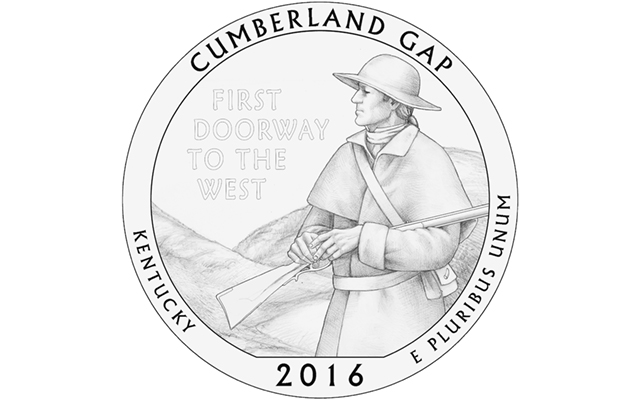 For Kentucky’s Cumberland Gap National Historical Park quarter dollar, the CCAC recommends a design featuring a frontiersman gazing across the mountains to the west. 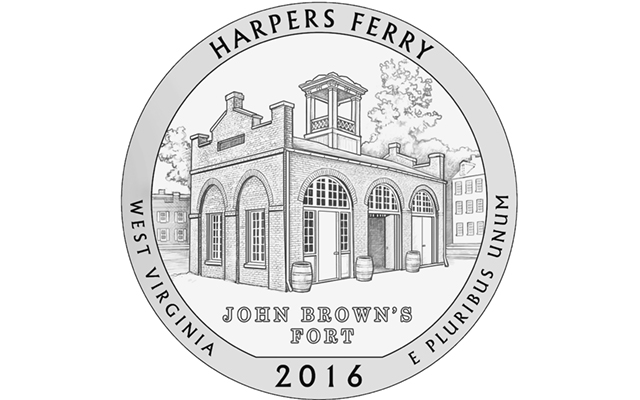 John Brown’s Fort, the site of abolitionist John Brown’s last stand during his raid on the United States Armory and Arsenal at Harpers Ferry, W. Va., is depicted on the CCAC-recommended quarter dollar design. 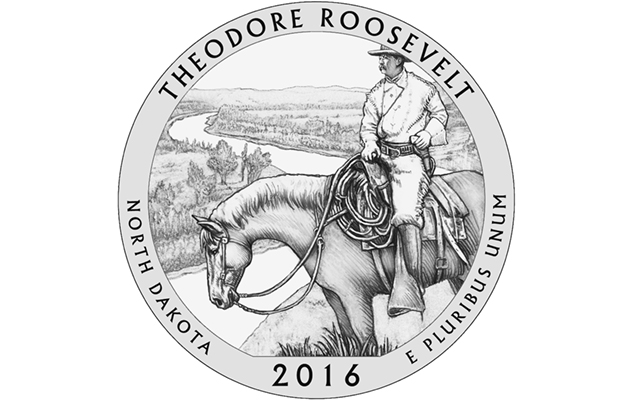 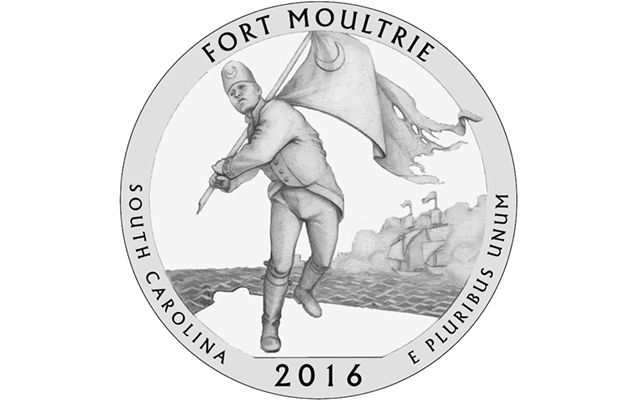 Sgt. William Jasper recovers the regimental flag and returns it to the ramparts while a British ship continues its attack in 1776 on the recommended Fort Moultrie, S.C., quarter dollar design.

The Citizens Coinage Advisory Committee recommended reverse designs Sept. 23 for the five America the Beautiful quarter dollars to be put into circulation in 2016.

The designs were recommended during the first day of a two-day CCAC meeting in Washington.

During the day’s discussions of the proposed designs, CCAC Chairman Gary Marks reminded fellow CCAC members to review the designs presented by the Mint in the size reduced to the 24.3-millimeter quarter dollar canvas. Doing so provides better insight into how the designs might look on the finished coin, Marks said.

Overall, CCAC members were looking for designs specifically representing the attributes of each park or historic site honored without appearing like a post card.

CCAC members were also looking for designs that included open fields, or negative space, offering opportunities for the use of Proof polishing techniques, and laser frosting on the devices, especially on the collector versions.

The CCAC split with the Commission of Fine Arts on four of the five designs. The commission reviewed the same coin designs during its Sept. 18 meeting in Washington, D.C.

The proposed design recommended for the Shawnee National Forest quarter dollar depicts a close view of Camel Rock with natural vegetation in the foreground. A red-tailed hawk soars in the sky overhead.

The design shows one of the more popular sedimentary rock formations, which was sculptured over the eons by wind and water, at the park in southern Illinois.

The Commission of Fine Arts and forest officials previously endorsed a different design depicting the full shape of the Camel Rock formation.

The recommended design recognizing Cumberland Gap National Historical Park depicts a frontiersman gazing across the mountains to the west. In the field to the left of the frontiersman appears the inscription in four lines, FIRST / DOORWAY / TO THE / WEST.

Many pioneers used Cumberland Gap on their journey into the western frontiers of Kentucky and Tennessee.

CCAC members wanted to make sure the garb and firearm of the frontiersman on their recommended design are representative of the period.

The panel also recommended the DOORWAY inscription be featured more prominently so it is not lost in the finished coin. A suggestion was made by CCAC members Erik Jansen to make the inscription incuse, but U.S. Mint production officials said doing so would likely create production problems.

The CFA previously recommended a design depicting a whitetail buck in the foreground with the Cumberland Gap in the background.

John Brown’s Fort, the site of abolitionist John Brown’s last stand during his raid on the United States Armory and Arsenal at Harpers Ferry, is depicted on the CCAC-recommended quarter dollar design.

During the raid, Brown took refuge in the building, originally used to house the fire engine and guards for the armory. He was eventually taken into custody by U.S. armed forces led by Col. Robert E. Lee of the United States Army.

The building was the only armory building to escape destruction during the Civil War.

Two proposed designs depicted a hand clutching a rifle emerging from stylized water with a gear in background — references to the water at the convergence of the Potomac and Shenandoah rivers  being a source of power.

CCAC member Heidi Wastweet, a professional artist, said the two renditions appeared to her as someone drowning.

One design, depicting an elevated view of Harpers Ferry, was the preference of park officials and the CFA. The CCAC rejected the design as being too cluttered.

CCAC member Donald Scarinci, an attorney and specialist in medallic art, said if one human figure was to be represented on the America the Beautiful quarter dollars, it has to be Theodore Roosevelt. The National Park Service notes that, as president, “Roosevelt used his authority to protect wildlife and public lands by creating the U.S. Forest Service and establishing 51 Federal Bird Reservations, 4 National Game Preserves, 150 National Forests, 5 National Parks, and enabling the 1906 American Antiquities Act which he used to proclaim 18 National Monuments.”

The coin program commemorates a national park, forest or other site in each state and territory and Puerto Rico .

The panel offered some criticism of the recommended rendering, since the design chops off the top of Roosevelt’s head. CCAC members recommended the design be revised to rectify their concerns.

CCAC member Michael Moran questioned before full discussions began whether the eventual recommended design was an original rendering, since it strongly resembles an image in a biographical book on Roosevelt.

Greg Weinman, a member of the U.S. Mint’s Office of Chief Counsel and the Mint’s liaison to the CCAC, said all designs submitted have to be warranted and certified as being original.

Weinman checked his records and assured CCAC members the design was original.

The same CCAC-recommended design was also previously endorsed by park officials and the CFA.

Sgt. William Jasper recovers the tattered regimental flag suspended from its broken staff and returns it to the ramparts while a British ship continues its attack in 1776 on the CCAC-recommended Fort Moultrie quarter dollar design.

Wastweet convinced fellow CCAC members that the design eventually recommended shows strong movement and conveys the message the best without need of explanation.

The CFA and Fort Moultrie officials endorsed a different design depicting St. Jasper clasping the flag as cannon fire from British ships flies through the air and explodes on the beach around him.

The recommendations from both the CCAC and CFA will be forwarded to the Treasury secretary for final approval.