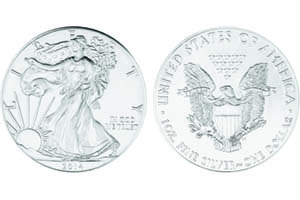 The American Eagle silver bullion coin could see a new reverse design should the Citizens Coinage Advisory Committee recommend such a change to the Treasury secretary.

Former U.S. Mint Chief Engraver John M. Mercanti said March 12 that he isn’t surprised that formal efforts are being taken to replace his Heraldic Eagle reverse that has graced the reverse of the silver American Eagle bullion coin since 1986.

“I figured it was a matter of time before they did something with that,” said Mercanti, who retired Dec. 30, 2011, after 46 years of U.S. government service — 36 of those spent as a sculptor-engraver at the U.S. Mint — leaving as chief engraver. “It’s been talked about over the years. Let’s see where it goes. Something eventually had to move on it. It’s been a great program for collectors.”

The Citizens Coinage Advisory Committee has scheduled a special telephone meeting April 8 to recommend a new reverse for the bullion version of the 1-ounce .999 fine silver American Eagle.

Getting the silver American Eagle reverse changed has been a longtime CCAC priority, mentioned for several years in its annual report.

CCAC Chairman Gary Marks announced the initiative for the meeting during a March 11 meeting in Washington as the panel was considering several eagle designs proposed for the three-coin 2015 U.S. Marshals Service 225th Anniversary commemorative coin program.

Marks said any of the proposed commemorative coin designs that were not approved and did not receive CCAC endorsement would still make ideal candidates for the silver American Eagle program.

Since Mercanti’s Heraldic Eagle has been on the coin for 28 years, the Treasury Department can, on its own initiative, and with the approval of the Treasury secretary, change the design without congressional approve.

The Coinage Act of Sept. 26, 1890, codified in Title 31 of the U.S. Code § 5112 (d)(2), states: “The Secretary shall prepare the devices, models, hubs, and dies for coins, emblems, devices, inscriptions, and designs authorized under this chapter.

“The Secretary may, after consulting with the Citizens Coinage Advisory Committee and the Commission of Fine Arts, adopt and prepare new designs or models of emblems or devices that are authorized in the same way as when new coins or devices are authorized.

“The Secretary may change the design or die of a coin only once within 25 years of the first adoption of the design, model, hub, or die for that coin. The Secretary may procure services under section 3109 of title 5 in carrying out this paragraph.”

Marks’ statement that the change would be recommended for just the silver bullion version of the American Eagle still leaves the door open for Mercanti’s reverse to be retained for the reverse of the Proof version and any other silver American Eagle coins beyond the bullion pieces.

In the CCAC’s 2011 annual report, the panel noted:

“In 2011, the current design of the $1 Silver Eagle Bullion Coin had been in use for 25 years. Recognizing an opportunity to advance efforts to pursue modern excellence in the design of U.S. coinage, the CCAC recommends the $1 Silver Eagle Coin be redesigned, beginning in 2014, within the requirements of the coin’s original enacting legislation, Public Law 99-61. This statute requires an obverse design symbolic of Liberty and a reverse design of an eagle. In an effort to create continuity between the obverse and reverse designs selected for this coin, the CCAC further recommends that the design selection process focus on selecting obverse and reverse designs created by the same artist.”

The current obverse and reverse designs for the Proof and bullion versions for the silver American Eagle were introduced in 1986.

Mercanti executed his Heraldic Eagle reverse while a sculptor-engraver on the U.S. Mint’s engraving staff based at the Philadelphia Mint.

Mercanti is author with Michael “Miles” Standish of American Silver Eagles: A Guide to the U.S. Bullion Coin Program.

Mercanti’s reverse for the silver American Eagle features a heraldic eagle with shield; the eagle holds an olive branch in the right talons and arrows in the left.

The silver American Eagle obverse is based on sculptor Adolph A. Weinman’s 1916 Walking Liberty half dollar, which the U.S. Mint describes as “widely considered one of the most beautiful American coins ever minted.”

Marks notes that the Mint’s artists have in recent years produced a number of eagle designs that were not accepted for the coins for which they had been created.

The Mint has been asked to collect those designs, including several eagle designs that were being proposed for the U.S. Marshals Service silver dollar, and create a portfolio of possible new eagle reverses.

Marks is obviously hoping that a CCAC recommendation would put pressure on the Mint to make the change.

The American Eagle silver bullion coins each contain a minimum of one troy ounce of 99.9% pure silver and carry a face value of one dollar.

The silver bullion coins are sold to a series of authorized purchasers for the closing spot price of silver per ounce on a given day, plus a premium of $2 per coin.

The coins are then sold to secondary market distributors or directly to the general public by the authorized purchasers.