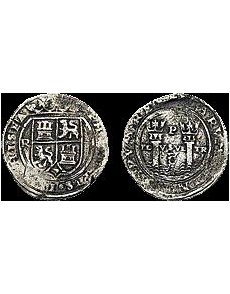 One of three examples known for an early silver 8-real coin struck at the Lima Mint highlights Cayon’s Feb. 4 offering of an important auction of Spanish and colonial 8-real coins.

Spanish auction firm Cayon on Feb. 4 offers a “highly important collection” of Spanish and Latin American 8-real coins and other coins in an auction in Madrid.

The Spanish silver 8-real coin achieved a rare status in numismatic history, becoming a universal currency around the globe in the centuries following its debut under Peter of Castile in the 1300s.

The opening of a mint in Mexico City in 1535 is a milestone, as the coin began to make an impression in North and South America (Spanish coins, among others, remained legal tender in the United States until 1857). Multiple mints in Spain and Latin America struck the silver 8-real coin.

The collection offered by Cayon traces the history of the denomination from 1540 through 1821, when Mexico achieved independence from Spain.

Among highlights from the collection is one of the first issues of the Lima Mint. The silver coin is only the third example of the subtype.

Experts disagree as to when exactly it was struck (the coin does not bear a date).

Alonso del Rincon Jr. was the assayer at the Lima Mint when it opened in September 1568 inside the same building housing a local jail. One theory suggests that the coin was struck circa 1568 to 1571, but the Cayon catalogers, based on evidence from other researchers, pinpoint the striking from between September 1568 and Oct. 11, 1569, when the mint was moved to La Plata because of complaints about the fee for having silver refined and over missing silver, according to the auction house.

Knowing when the Lima Mint was shuttered helps to pinpoint the likely period the undated coin was struck, according to Cayon, because 1570 was “virtually a non-working year” as the La Plata Mint was established.

Researchers identify two distinct types, with two examples known of the type I pieces, which include PL-VS-LT on the reverse, and four examples of the type II coins, which feature PL-VSVL-TR on the reverse. Of the type II coins, two subtypes are identified; the example offered in the Cayon Feb. 4 auction is of the subtype IIB, with PHILIPVS on the obverse (the ruler’s name appears as PHILPVS on the subtype IIA coin, which is unique).

The auction offers 1,492 lots of coins and is scheduled to be held at the Hotel Ritz in Madrid.

A catalog may be viewed online at www.cayon.com for free, and may also be ordered from the firm.