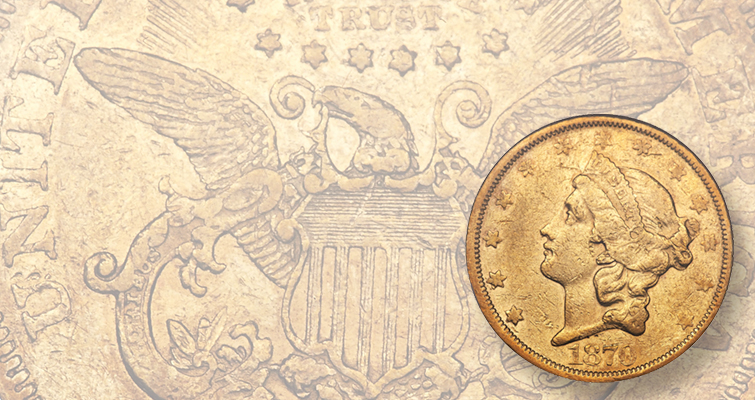 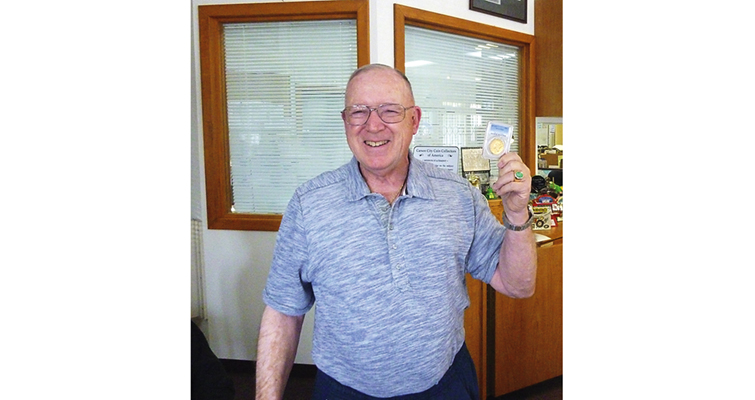 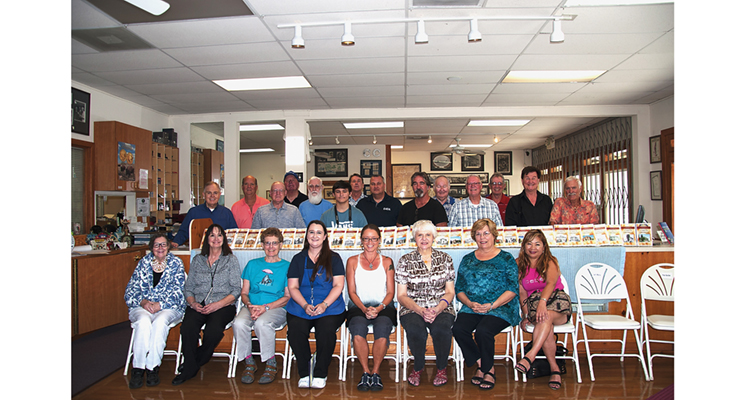 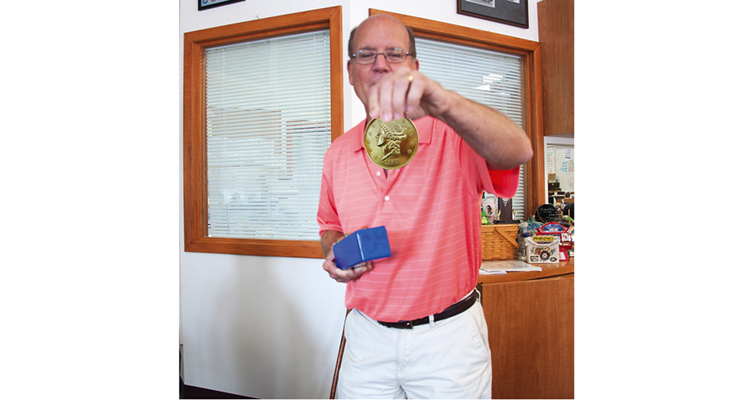 C4OA member Kirk Harris displays an example of the 1882-CC double eagle replicas that he distributed to meeting attendees. 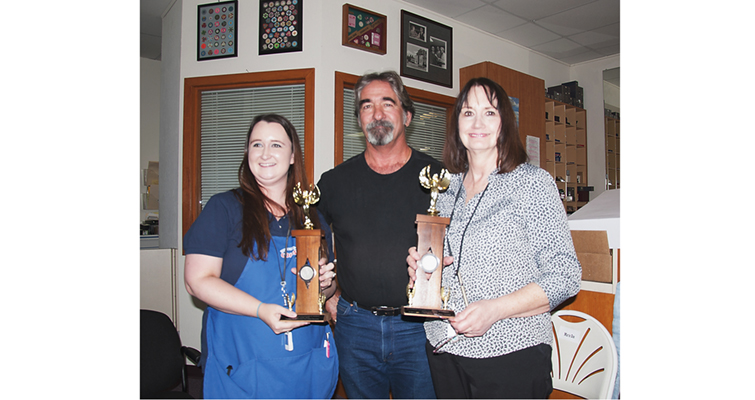 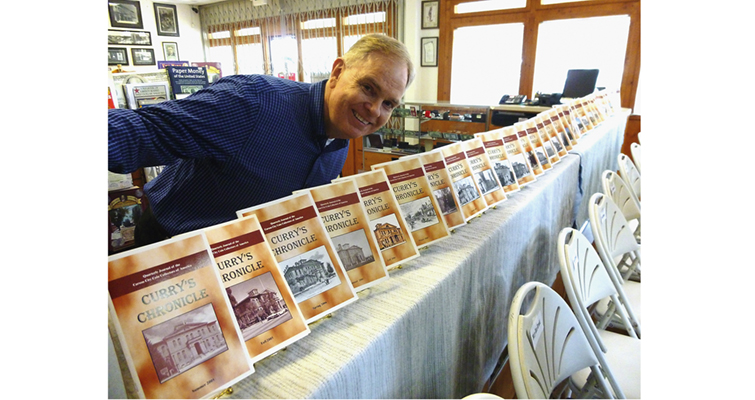 C4OA president Rusty Goe poses with a display of all 35 issue of Curry’s Chronicle published to date.

The following news release was issued by Maya Jones on behalf of the Carson City Coin Collectors of America:

September 1, 2015, Reno, NV – Enthusiastic members arrived in Reno, Nevada on Saturday August 22 from as far away as Florida, Missouri, Illinois, and Colorado for an afternoon of sharing, education, and fellowship at the Carson City Coin Collectors of America’s (CCCCOA) annual regional meeting.

The group, numbering 25 in all, sat in a large rectangular-shaped area in the showroom of Southgate Coins, the store owned by the CCCCOA’s president Rusty Goe and his wife Marie.

After Goe welcomed everyone he recited a pledge that he said conveyed the spirit of the members in attendance. It went like this:

I believe in the Carson City Mint

And in the many fascinating coins produced there,

And I believe in Nevada, the state in which the mint operated,

And I am committed to increasing my knowledge base

Which will help me to appreciate my passion

For as long as I shall live

Goe then introduced two themes he wanted to emphasize during the course of the meeting: the power of the story in the context of coin collecting, and the need for community in the life of a collector. He talked about four essentials of coin collecting: Population, Grade, Price, and Story. After giving brief summaries of population, grade, and price and explaining how story is intertwined with each one, he said “collectors cheat themselves if they don’t learn the stories behind the coins they buy.” He told the group that the combined efforts of the CCCCOA’s membership over the past ten years have helped to bring “the story of the Carson City Mint and its coins into focus.” He told how a 19th century novelist named Mayne Reid wrote in one of his books to “unroll the world’s map ... [and] let your eyes wander,” and encouraged the reader to “follow me with the eye of your mind” as he narrated stories about the Old West. Goe invited members to take the same approach when pursuing the collecting of Carson City coins, and follow him with their “imagination, inquisitiveness, and enthusiasm,” “so we can explore as far as our eyes and minds can wander.” He told how the prominent 20th century coin dealer Abe Kosoff had promised fellow numismatists that each one could triple his enjoyment if he “[dug] up as many facts as you can about each coin that you buy.”

Goe next introduced Larry Martin who, with the help of his wife Linda, showed his complete 19-piece set of certified Carson City half eagles. Martin said the average grade-point of the coins in his set is about AU-54.

Dan McCarty then took the speaker’s platform and told the group how he appreciated the story behind a Capped Bust half dollar he found that once belonged to half dollar specialist Al C. Overton. McCarty then showed the group his notebooks filled with Comstock Lode/Carson City Mint-era ephemera, which included a bond certificate from the V & T Railroad and checks signed by Comstock mining magnates and Carson City Mint personnel.

Next, Goe introduced Randy Clifton and Bill Dunn who handed out ink pens with text on each that commemorated the CCCCOA’s 10th anniversary. Randy Clifton then presented trophies to Marie Goe and Southgate Coins’s employee and CCCCOA member Maya Jones, in honor of these two ladies’ extraordinary efforts that have helped keep the club going and its journal, Curry’s Chronicle, published year after year. Each trophy has a Carson City Morgan silver dollar, sealed in a protective holder, attached to it.

At this point Goe conducted a fundraising auction of donated items on behalf of the CCCCOA. A mix of CCCCOA memorabilia and Carson City coins was offered, with the top prize, an Uncirculated 1883-CC Morgan silver dollar encased in a custom Nevada-shaped Lucite holder, going to Mary Elise Arnold for a generous bid of $600.

After the auction, Goe continued talking about the importance of the story in coin collecting. He told why he felt the urgency to learn the name of Carson City Mint superintendent James Crawford’s dog when he was writing his biography about Crawford. He said he didn’t want his book to just be filled with reports about how many coins were produced under Crawford’s supervision, and hard, cold statistics. In his words, Goe “wanted to bring to life the era in which James Crawford thrived.” Discovering the name of Crawford’s dog (which was Nap, by the way) played a role in his accomplishing his goal. Goe also shared how his discovery of the site in Virginia City where a wagon maker, who once owned an 1876-CC twenty-cent piece, lived in the 1870s brought untold meaning to his purchase of that same twenty-cent piece in 2009. Goe said that “anyone who just buys such a coin and doesn’t find out about its storied past is only getting a portion of the coin's true value.”

Goe went on to tell how that after he published his first book, The Mint on Carson Street, he sent a copy of it to documentarian Ken Burns. Goe included a letter with the book in which he suggested to Burns, who had produced the great PBS documentary about the Civil War, that Burns make a documentary about the history of coin making in the United States. Goe said Burns politely replied that his schedule would not allow him to undertake such a project. Goe told the group he still retained hope that maybe someday someone would at least produce a documentary about the Carson City Mint, in the same style as Burns’s Civil War documentary. He tossed out ideas to members seated at the meeting about the many different topics that could be covered in a documentary about the Carson City Mint. Starting with the emergence of Nevada as a territory, the list of topics grew longer as Goe prompted attendees for more feedback. Topics such as the discovery of the Comstock Lode, the passage of the Nevada Mint act in 1863, the constructing of the mint, the opening of it in 1870, the memorable coins produced at the mint, the scandals that plagued it, the final closing of the Carson City Assay Office in 1933, its transformation into a state museum, the GSA Hoard of Carson City silver dollars, and the sale of the world-class Battle Born collection in 2012 were just a handful of the ones mentioned. The members agreed that this would be a documentary worth watching.

Tony Arnold then told his fellow members how he had just added the 103rd coin to his Carson City collection, and how his quest to build a complete 111-piece set has gotten much more challenging. He passed around his latest acquisition, an 1871-CC $20 gold piece graded VF-30 by PCGS.

Following Arnold came Kirk Harris, who passed around the 1879-CC $20 gold piece graded MS-62 by PCGS he won in the Battle Born auction in August 2012. He then handed out a large-sized replica of an 1882-CC double eagle (about the diameter of a drink coaster) to everyone in attendance.

Mary Elise Arnold next invited the members to join her in a game of “Name that Grade,” which involved her passing around her 1892-CC half eagle in an NGC holder on which she had concealed the certification label. She asked members to write down what they thought the coin’s grade was. At the end of the exercise Mary Elise pulled the cover off the label, revealing that NGC had assigned the half eagle a rating of “AU Details, Damaged Rim.” The coin had also been cleaned. This activity elicited many amusing comments, and fun was had by all.

Goe took the floor one last time and talked briefly about the need for community in the hobby of coin collecting. He acknowledged to the group that there were difficulties in conducting meetings such as the one they were having that day. The distance between members presented one of the biggest challenges, said Goe. And then there’s the cost of travel and of taking time off from work (for the members who are not retired). Goe commended everyone for making the effort to attend the meeting, especially those who had traveled the farthest to get there. Goe said “it is essential to meet like this if collectors are to keep their passion for the hobby burning.”

He then talked about the proliferation of coin collecting discussion boards on the Internet. He mentioned two in particular, one from 2012 and the other from 2015, because the participants had focused exclusively on Carson City Coins. Goe read random comments participants in these online forums had posted, and he told about the images of “CC” coins those participants had uploaded. He said it was unfortunate that CCCCOA members had not participated more actively in these discussion boards. He said CCCCOA members could have provided much-needed background information for the coin images and questions and comments the discussion board’s participants had posted. He said that CCCCOA members’ “presence on these forums would have elevated the forums to new levels,” not to mention it would have provided good publicity for the club. He asked the attendees how they thought the participants on those Internet forums would have felt “about being at this meeting today.” The general consensus was that those anonymous online users would have enjoyed the meeting immensely. Goe said that is what live, in-the-flesh community is all about; and combined with learning about the stories behind the coins, “it just doesn’t get any better than this.”

With that, Goe closed the meeting, and the 25 members traveled across the street to meet for a festive dinner at Claim Jumper restaurant, where the good-spirited comradeship continued for another three hours.

The Carson City Coin Collectors of America is a non-profit club incorporated in the state of Nevada. It is currently closed to new membership until further notice.

Following is the club’s mission statement:

To increase knowledge on the subject of the Carson City Mint and the many fascinating coins produced there, and to promote camaraderie among fellow “CC” coin enthusiasts.

Rusty Goe founded the Carson City Coin Collectors of America in May 2005.