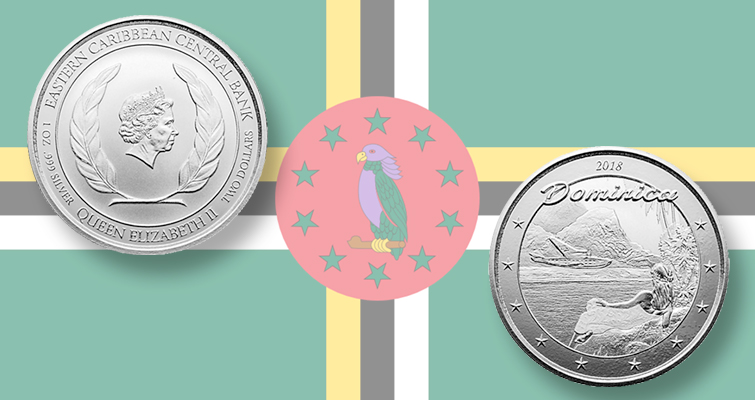 2018 coins celebrating the natural splendor of Dominica are the third release in a series of coins for all eight Eastern Caribbean states. The silver coin appears here.

The third issue in a series of silver and gold bullion coins for the Eastern Caribbean States is now available.

The new 2018 coin is titled Nature Isle, released by the country of Dominica, the latest coin in the series dubbed by issuer Scottsdale Mint as EC8.

The EC8 (Eastern Caribbean 8) program consists of four coins minted in 2018 on behalf of each of the eight Caribbean island entities that comprise the Eastern Caribbean Central Bank: Anguilla; Antigua and Barbuda; Commonwealth of Dominica; Grenada; Montserrat; St. Kitts and Nevis; Saint Lucia; and St. Vincent and the Grenadines.

Plain and colorized versions are being issued for each design in both silver and gold, for four coins total per country.

The ECCB is the official issuer of the Eastern Caribbean Dollar, the currency of the EC8 2018 coin program.

The reverse of the newest coin depicts the rain forest named Nature Isle on the island of Dominica.

The first design, for coins of Antigua, depicts a rum runner. The second design, on coins issued for Saint Kitts and Nevis, celebrates the pelican.

The obverse of all the coins display an image of Queen Elizabeth II, along with the weight and purity below.

Both obverse and reverse rims feature wavy radial lines making the coins harder to duplicate and providing a measure of security, according to Scottsdale Mint.

The coins, manufactured and distributed by Scottsdale Mint, are legal tender in the territories of the eight members that comprise the Eastern Caribbean Central Bank. Additional coins will be released soon.

The 2018 Nature Isle 1-ounce .999 fine silver coin has a limited mintage of 25,000 coins per design. Colorized versions do not have a stated mintage limit.

The 2018 Nature Isle 1-ounce .9999 fine gold coins’ mintage is limited to 5,000 pieces each, with an additional 500-coin mintage allotted for the colorized versions.

To learn more, or order the coins, visit the distributor website. 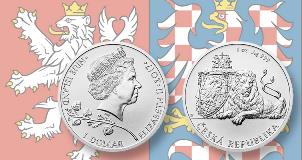 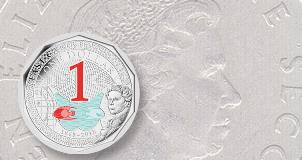 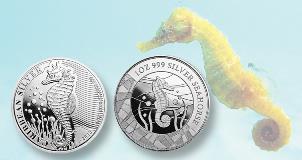