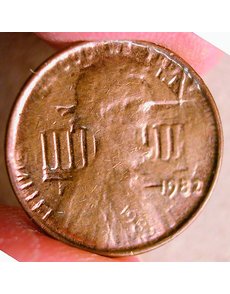 The obverse face of this 1982 Lincoln cent was struck once by a rotated, clashed cap. That strike left 1) a raised ghost image of the obverse design, 2) an incomplete brockage of the reverse design, and 3) an incuse, normally oriented version of the date. 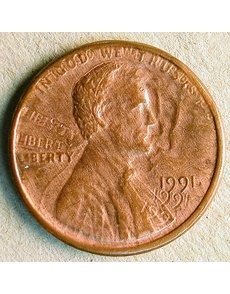 This 1991 Lincoln cent was struck once by a rotated, late-stage die cap. Two sets of incuse, normally oriented design elements overlie the raised ghost image. This coin is a more conventional form of rotated cap strike than the other error coins depicted this week. 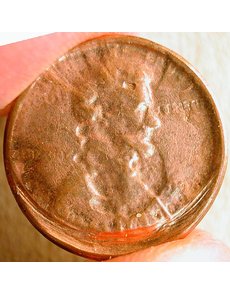 An obverse die cap came loose, rotated, and shifted north just prior to the strike that created this 1990 cent. 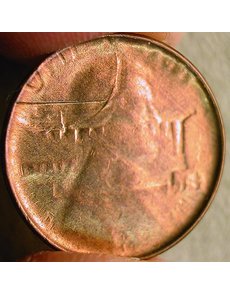 A second 1982 cent shows an early impression of a clashed cap. The raised ghost of Lincoln is flanked by an incuse Lincoln Memorial.

Sometimes incuse elements are mirror-image (facing backward and reading backward) and sometimes they’re normally oriented (facing the same way as the normal design). It’s rare when you find both orientations on the same face.

Such is the case with a 1982 Lincoln copper-alloy cent submitted by James Zimmerman. Struck through an obverse die cap (a previously struck coin adhering to and blocking the face of a die), it carries a sharp but incomplete mirror-image version of the reverse design on the obverse face. The incuse elements show no expansion or distortion. Running down Lincoln’s coat is an incuse, normally oriented version of the date.

An unusual sequence of events lies behind this unusual juxtaposition of forward- and backward-facing design elements. It began with a late-stage obverse die cap whose floor was greatly thinned from repeated strikes against a succession of planchets. If any design ever was present on the working face of the cap, it long ago had been erased by the ceaseless pounding. A late-stage obverse die cap will generate a mushy, raised ghost image of the obverse design.

The next step involved the cap coming loose and rotating about 45 degrees clockwise. A rotated, late-stage die cap will ordinarily leave an extensive set of normally oriented incuse design elements. As a die cap pounds away at the planchets fed in beneath it, the areas of the cap covering the field portion of the die are left thinnest. The remaining areas, which have molded themselves to the recesses of the die, are thicker because the effective striking pressure is lower here. When a cap is dislodged and shifts out of position, those thicker areas are driven into the next planchet, creating the incuse elements, such as the incuse 1982 date on Lincoln’s coat.

Dislodged die caps can rotate, shift laterally, or both. The last eventuality is displayed in a 1990 Lincoln cent struck by an obverse die cap that rotated 180 degrees and shifted toward the north. One set of normally oriented incuse design elements was generated. (Other sources of normally oriented incuse design elements are discussed in the Nov. 3, 2008, Collectors’ Clearinghouse column.)

The third step leading to the formation of Zimmerman’s cent involves the rotated cap clashing with the reverse die. The clash obliterated most of the thickened areas of the cap base that would have otherwise generated normally oriented incuse elements. Only the thickened area responsible for the date survived, undoubtedly because the area of the die behind it was deeply recessed.

When a late-stage obverse die cap clashes with the reverse die, it picks up an incomplete version of the reverse design. Only those portions of the cap backed by the field portion of the die tend to pick up an impression. When the die cap strikes the next planchet, it creates a clashed cap strike, a type of brockage.

A simple clashed cap strike can be seen on a second 1982 Lincoln cent provided by Zimmerman. A minimally expanded, incomplete incuse impression of the Lincoln Memorial flanks the raised ghost of Abraham Lincoln. Clashed cap strikes were previously treated in the Aug. 30, 2010, and Sept. 26, 2011, Collectors’ Clearinghouse columns.

Zimmerman’s atypical 1982 Lincoln cent (the first described) was struck immediately after the rotated cap clashed with the reverse die. Flanking the ghostly bust of Lincoln are the right and left sides of the Lincoln Memorial. Many incuse, mirror-image letters from the reverse design can be seen around the perimeter of the obverse face.

Step 3. The rotated, late-stage die cap clashes with the reverse die when a planchet fails to be fed into the striking chamber.

Step 4. A planchet is struck by the rotated, clashed cap.