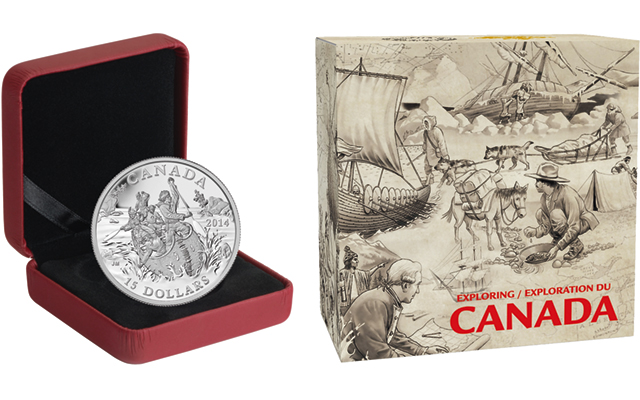 French explorers known as Voyageurs traversed Canada’s wilderness while engaging in the fur trade in the 18th and 19th centuries.

Voyageurs are the first theme in the Exploring Canada series of Matte Proof .9999 fine silver $15 coins from the Royal Canadian Mint, showcasing Canadian exploration and history.

The 10-coin subscription program rolls out through April 2015, kicking off with a design from Canadian artist John Mantha released June 3.

The reverse design shows five men shooting the rapids of a Canadian watercourse, aboard a birch bark canoe that typified the fur trade. The Native oarsman at the helm represents the inter-cultural alliances critical to the fur trade’s success, and the manner of dress among the men illustrates the extent to which the Voyageurs adopted Native ways of life. The treacherous waterway with its rocky outcrops is characteristic of the dangerous terrain the Voyageurs navigated, just one of many perils ever-present in the wilderness.

The first coin was issued at the price of $54.95 in Canadian funds.

Gatewest Coin Ltd. and Talisman Coins, official distributors for the RCM, carry the coin at fixed prices in U.S. dollars. Gatewest offers the coin for $47.95; Talisman's pricing was unavailable at press time.