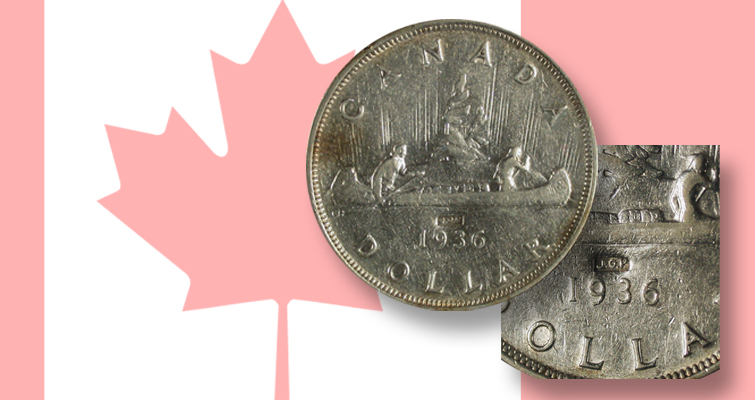 The debut of Canada’s first silver dollar in 1935 caused one British Columbia jeweler to counterstamp his initials on some of the coins. This 1936 example recently sold at auction.

A silver enthusiast left his mark on Canadian coinage, leading to rarities in the silver dollar series.

Four examples of his handiwork and the coins hosting them were offered for sale by two firms Sept. 30 and Oct. 1 at Toronto Coin Expo auctions.

The “JOP” countermarked silver dollars produced by Joseph Oliva Patenaude have become one of the most celebrated and collectable instances of “modified” Canadian coins today.

Alliance Coin & Banknote sold three examples Sept. 30 and Geoff Bell Auctions’ offered one piece during its Oct. 1 sale. Both firms have a 20% buyer’s fee reflected in prices recorded here, which are reported in Canadian dollars.

Bell has called the silver dollars “storied piece[s] of numismatic history” in the past.

“Our auction house has shown itself to be the leaders in the field of JOP counterstamped dollars through previous sales,” it said in 2017, when a new counterstamp type was discovered and auctioned.

Patenaude was an optometrist and jeweler, born in Quebec in 1871 and educated in Chicago. After brief stops in Alaska and Spokane, he settled in Nelson, British Columbia, becoming a well-respected member of the community. He died in 1956 at the age of 85.

According to Canadian Coin Digest, edited by George Cuhaj, Patenaude sold his jewelry business in 1930 to focus solely on optometry.

He continued to participate in numismatics, and the 1935 release of Canada’s first silver dollar reportedly delighted him, after years of pushing for such a coin.

“Just how much of an impact he had is not certain,” according to the Digest. Still, when the new coins were released, “He is said to have ordered 1,000 of them, counterstamped them with his initials, and gave them out in change at his store.”

He continued this practice until at least 1949, the year before he retired.

At least four varieties of the counterstamp are cataloged, and Patenaude used the punch on at least three different years’ issues of silver dollars.

The Type I variety has three incuse initials without periods.

The Type II variety is the most common, and it displays the initials in a recessed oval, with periods after the first two letters.

The authenticity of the two other varieties is questioned, according to Canadian Coin Digest, because they are omitted in early literature about the subject, although an example with the third style (Large Initials) is traced to Patenaude’s housekeeper.

The crude nature of the punches (which could be easily replicated), and the associated value because of the rarity, has led counterfeits to surface.

All four examples in the two sales feature the Type II variety, each certified and authenticated by third-party services. 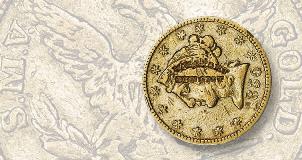 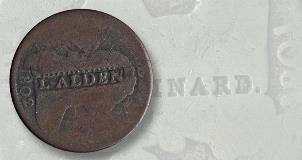 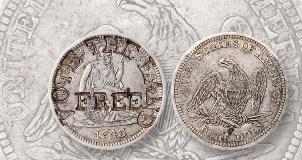