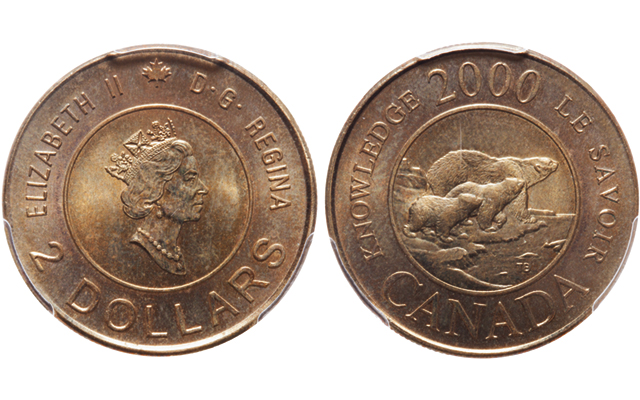 One of apparently just two known examples of a Canadian $2 coin struck on a Sacagawea dollar planchet is among highlights of the Robert J. Kril Collection of Canadian and World Error Coins to be offered at auction June 26 to 28. It is estimated at $8,000 Canadian. 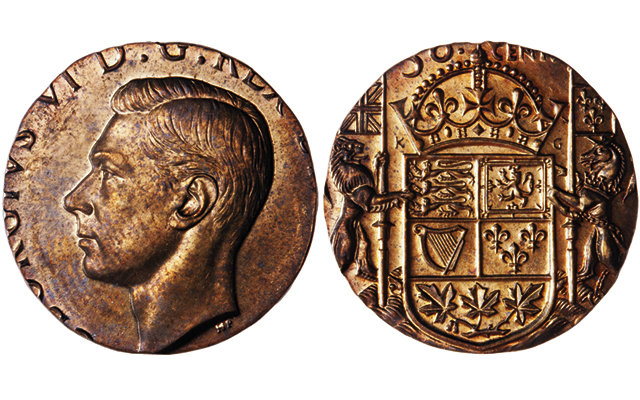 The absolute highlight of the Kril Collection is the 1942 or 1943 tombac “50-cent” coin struck on a planchet for the brass 5-cent coin issued during World War II to save nickel for the war effort. The error is estimated to sell for $15,000+ Canadian. 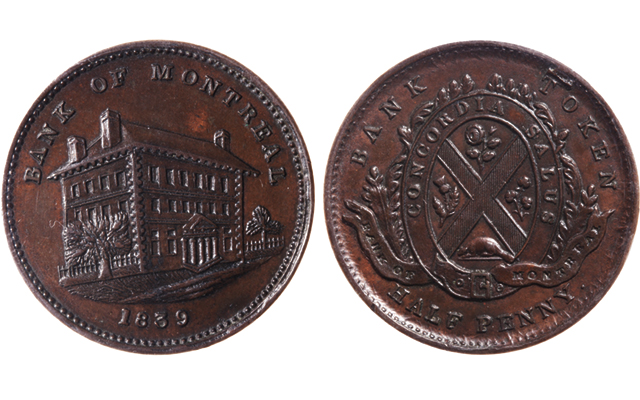 An Uncirculated 1839 “Side View” Bank of Montreal token, formerly in the John J. Ford Jr. Collection, highlights the colonial Canadian tokens section in the June 26 to 28 auction. Graded Uncirculated 60 by International Coin Certification Service, the token is estimated at $20,000+ Canadian. 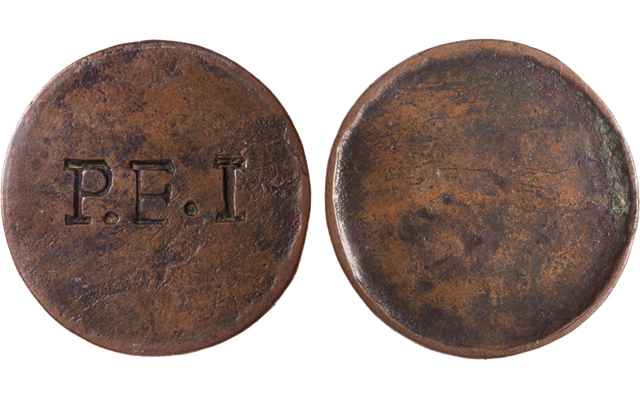 The enigmatic Prince Edward Island tokens are copper and uniface, and may have been struck circa 1840, but experts do not agree on whether they were issued by a farmer or a tinsmith, and little else is known. This example, graded Very Fine 30 by ICCS, is estimated at $7,000 Canadian.

One of the auction highlights is a 2000 Canadian $2 coin struck on a planchet for the Sacagawea dollar. The error is part of the Robert J. Kril Collection of Canadian and World Error Coins. The late Kril spent more than 40 years assembling the collection of “spectacular errors spanning from before Canadian confederation through the mid 1990s,” according to the auction catalog.

Kril focused on elusive historic and modern errors, pieces where only a few examples are known, according to the two firms. This auction is a “once-in-a-lifetime opportunity to view and acquire some of the most exceptional error coins of Canada and the world.”

During his collecting journey, Kril “quietly assembled an unprecedented collection including dozens of unique and ultra rare errors that may be best described as ‘wow’ coins,” according to the auction firms.

Canada’s ringed-bimetallic $2 coin, introduced in 1996, is 28 millimeters in diameter.

Two such errors are known, according to the auction firms, citing the Jan. 4, 2010, sale of another example by Heritage Auctions. That piece, graded Mint State 66 by Professional Coin Grading Service, realized $6,325, including the 15 percent buyer’s fee.

The example offered in the Legacy sale is graded MS-64 by PCGS and estimated at $8,000 Canadian.

The highlight of the Kril Collection, however, is the 1942 to 1943 tombac “50-cent” coin — a piece struck from dies for the 50-cent coin on a tombac planchet meant for the 5-cent coin.

The dramatic error is one of the most spectacular errors ever found in Canada, according to the auction firms.

During World War II, the 5-cent coin alloy was changed to divert nickel to the war effort. Tombac, a brass alloy, was adopted and the denomination was made 12-sided so that, even if tarnished, the coin would not readily be confused with Canada’s 1-cent coins.

Since the portion of the 50-cent die bearing the date did not strike the error piece, the exact date of the error cannot be determined.

The unique error is graded MS-63 by Numismatic Guaranty Corp. The auction firms describe it as having “lustrous golden brass surfaces, light even toning and a full sharp strike,” and it is estimated to realize $15,000+.

An 1839 copper halfpenny from the Bank of Montreal’s “Side View” series of tokens leads the colonial token section. This piece, graded Uncirculated 60 by International Coin Certification Service, shows a side view of the bank’s headquarters on the obverse of the token.

The example in the auction is classified as a 15 Palings variety, for the number of stakes composing the fence on the obverse.

With “very even dark chocolate toning overall” and traces of original luster, the token is estimated to sell for $20,000 Canadian.

Another token formerly in the Ford Collection is an example of the enigmatic copper Prince Edward Island token.

Uniface, the crude piece bears only the island initials P.E.I. on the obverse. Researchers suggest that tinsmith Dennis McCarthy produced them, though others attribute the pieces to farmer Peter McCausland (who actually may have only helped circulate them).

Little is known about the tokens, which are on a cent-sized planchet.

The earliest known reference to the pieces appears to be an article in 1890, with the first record of one being sold at auction following in 1895. Few examples have entered the market over the years, with perhaps as few as two examples of the early pieces (possibly struck circa 1840) known.

Two examples of the early pieces were in Stack’s Bowers’ auction No. 23 of Ford material on Aug. 14, 2013, and that sale also included a piece believed to have been struck circa 1900. In that sale, the piece in the present auction was described as Fine and realized $3,290, including the buyer’s fee.

The example in the upcoming sale is graded Very Fine 30 by International Coin Certification Service. It is estimated at $7,000 Canadian.

A catalog may be viewed at the Canadian Coin & Currency website. Bidding is available through iCollector.com.