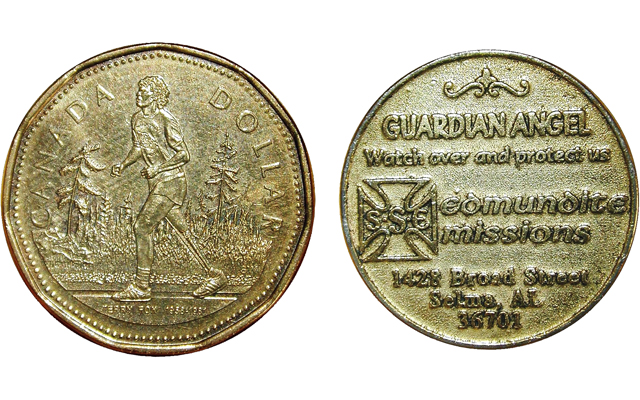 Above left is a 2005 Canadian dollar struck to mark the 25th anniversary of the Marathon of Hope, depicting Terry Fox. At right is a Guardian Angel token struck for the Society of St. Edmund, Edmundite Missions, Selma, Ala.

The 11-sided 2005 Canadian dollar was struck to commemorate the 25th Anniversary of the Marathon of Hope, a cross-Canada run by Terrance Stanley “Terry” Fox, whose portrait appears on the reverse of the coin. Sales of the coin went to funding cancer research.

Fox, an athlete, humanitarian and cancer treatment activist, ran the Marathon of Hope while fitted with one prosthetic leg. At the age of 18 he had been diagnosed with bone cancer and his right leg was amputated about 6 inches above the knee.

After 18 months of preparation, Fox started his run in St. John’s, Newfoundland, on April 12, 1980. Though he received little attention at the beginning of his journey, Fox eventually gained quite a following.

Running the equivalent of a marathon each day, through Quebec and parts of Ontario, Fox had to stop running outside of Thunder Bay, Ontario, when it was discovered that the cancer had spread to his lungs. He had run more than 3,300 miles.

Another great find was a Guardian Angel token that was produced for the Society of St. Edmund, Edmundite Missions, located in Selma, Ala.

Edmund Rich (circa 1175 to 1240) of Abingdon, England, was a noted professor of math at Oxford University.

A dream inspired him to leave teaching and become a priest. He gave away his possessions to care for the sick and poor.

Later, while in Rome, Edmund became sick and died. Within six years of his death, Pope Innocent IV had canonized Edmund as a saint. Six centuries later, the Society of St. Edmund was founded at Pontigny, France.

In 1937, as a response to an appeal by then Pope Pius XI, Fathers Frank Casey and John Paro arrived in Selma, Ala. Appalled by the poverty they discovered, these two men founded the Society of St. Edmund, Edmundite Missions.

They went to work immediately raising money to help the poor by providing food, education and clothing.

In the 1940s, they were joined by a group of the Sisters of St. Joseph of Rochester (New York). Together they established schools and hospitals.

The Edmundite missionary efforts continue to serve the poor and needy today.