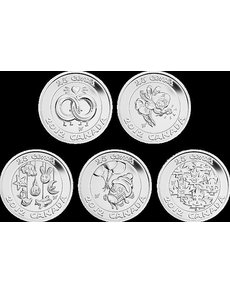 Pop artist Gary Taxali designed the reverses of five new 25-cent coins for Canada, which are offered in gift sets and packaging; the Baby, Birthday, Oh Canada and Wedding coins come in sets with circulating coins, while the Tooth Fairy coin is available alone in a card.

Maple leaves sticking their tongues out, a flying cupcake and wedding rings with personality are just some of the whimsical designs on a new series of Canadian 25-cent coins.

Taxali is “known for a retro style combining pop and classical art with 1930s-inspired iconography” according to the RCM. His previous clients include the New York Times and Levi’s, among many others. Barnes, “whose work is firmly rooted in the world of pop culture,” according to the RCM, counts among his past clients Audi and Trump International Towers in Dubai, UAE.

The Baby, Birthday, Oh Canada, Wedding coins are the centerpiece of each set, which offers Uncirculated examples of each Canadian circulating coin, with the special 25-cent coins replacing the standard Caribou design. The Tooth Fairy coin is sold by itself in a gift card.

Dave Tupper, an associate art director at Young and Rubicam in Toronto, worked with Taxali on the project, according to an essay Taxali posted at Drawger.com, a website community for illustrators. A sixth Taxali coin design, for a holiday theme, will be released in the fall, according to that post. Macleans.ca reported that the Holiday design shows laughing, mischievous ornaments dangling from a tree.

Taxali, who was born in India, said that his surname means “superintendent of the mint” in modern Hindi and was bestowed to an ancestor some 300 years ago when he created a coin that was tough to counterfeit.

All of Taxali’s designs appear with a circle on the reverse, surrounded by stylized inscriptions of 25 cents, 2012 and CANADA in the Chumply font created by Taxali (and used for his GT initials appearing within the circle). This was the first time the RCM allowed an artist to change the typography on coins, according to artdaily.org.

A mobile with a car, plane, rabbit, clown, duck, moon and star appears on the Baby coin, while a soaring anthropomorphic cupcake, carried by three balloons, graces the Birthday coin. Six maple leaves, all wearing facial features (including one sticking its tongue out) are on the reverse of the Oh Canada coin, while two interlocked and specifically gender-neutral wedding rings are on the Wedding coin.

Taxali told The (Toronto) Star that the rings, which appear anthropomorphized, are specifically nonspecific to represent gender neutrality, and the RCM “really liked that idea because it represents the spirit of our nation. ... I think this is probably the first piece of currency in the world, paid [for] by a federal government that is pro-wedding regardless of gender and that makes me really happy.”

A fairy with an impish grin waves a tooth-topped wand on the Tooth Fairy coin.

The Susanna Blunt effigy of Queen Elizabeth II appears on the obverse of the coins, which are struck in three-ply nickel-plated steel to the same specifications as the circulating version (23.88 millimeters, 4.4 grams).

The sets are packaged in folders with the Taxali-designed coins in a die-cut window in the cover, the same manner used to display the solo Tooth Fairy coin.