Canada to stop producing cent in the fall 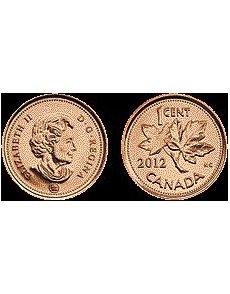 Canada’s 1-cent coin, issued since 1858 before Canada confederated in 1867, will be eliminated, the Ministry of Finance announced March 29. The Royal Canadian Mint will strike the last cent coin for circulation some time this fall.

While their counterparts in the United States continue to seek a way forward with a different alloy, Canadian finance officials have abandoned hopes to retain the 1-cent denomination.

Production will end sometime in fall 2012.

According to the budget, inflation has eroded the cent’s purchasing power over the years so much that “today it retains only about one-twentieth of its original purchasing power.” Canada’s cent was introduced in 1858.

Some consumers consider the coin a “nuisance,” according to the March 29 announcement. A 2007 survey (one of two by the Desjardins and another by the Royal Canadian Mint within 24 months) found similar sentiment, with widespread support for withdrawal for a denomination then called “pointless” and whose cost, despite the introduction of a multi-ply plated steel alloy more than a decade ago, has spiked above its face value.

The RCM will stop production this fall, and 1-cent coins will be gradually withdrawn from circulation, though finance officials have said consumers can continue to use cents indefinitely.

At some point, price rounding on cash transactions will be required. Rounding will be to the nearest 5-cent increment; payments made via electronic means will not be affected. Citing the experience in Australia and New Zealand, Canada’s Ministry of Finance does not expect the rounding to increase inflation, but said that businesses “are expected to round prices in a fair, consistent and transparent manner.”

Alex Reeves, senior manager of communications at the RCM, said that the Mint will recover the copper in all 1996 and earlier cents as well as later cents containing copper (some years several alloys have been used). Many earlier cents have already been harvested through the RCM’s profitable Alloy Recovery Program.

Less clear is where this leaves the venerable Maple Leaf design, which has appeared on the reverse of the cent since a redesign timed with the beginning of George VI’s reign in 1937.

“Since our role is limited to manufacturing and distributing Canada’s circulation coinage, we have no authority over the future of the one-cent denomination,” Reeves said.

Whether the cent is included in collector products in the future has not been determined, he said.

“We will look into new collector product options, but keep in mind that it’s still a very recent development and we’re not in a position to announce anything yet,” Reeves said.

Reeves said the elimination of the cent will not affect jobs at the Winnipeg Mint, which produces Canada’s circulation coinage, as well as circulation coinage for dozens of nations around the world, but the shift in production capacity does free the RCM to engage in more battles for foreign coinage contracts.

“Certainly it will add capacity. That’s a positive consequence,” Reeves said, when asked about the foreign contracts.

The RCM is set to introduce new $1 and $2 coins into circulation this spring. The new coins will bear increased security features, including Maple Leaf holograms. ¦