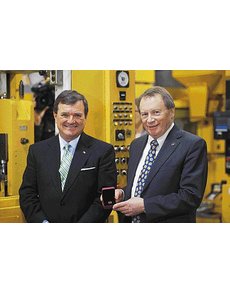 Royal Canadian Mint President and CEO Ian E. Bennett, right, displays Canada’s last 1-cent circulation coin, which was struck by Canadian Finance Minister James Flaherty, left, in Winnipeg, Manitoba, May 4. The final strike has been entrusted to the Canadian Currency Museum of the Bank of Canada in Ottawa, which says it plans to put the coin on display.

Canada’s last cent struck for circulation will be placed on public exhibit in the nation’s capital.

Though Paradis reported that arrangements for displaying the coin had not been finalized, the museum does intend to display the historic piece “as part of a small exhibit to profile this new acquisition and the changing nature of the cent in Canada from its introduction to date.”

In a May 4 ceremony held at the Royal Canadian Mint’s high-speed manufacturing facility in Winnipeg, Manitoba, the Canadian finance minister, James Flaherty, struck the last cent to be produced for circulation.

Flaherty said: “For the past several years, Canadian taxpayers have been burdened by the rising cost of producing pennies. While the penny can still be used in day-to-day transactions, our government is encouraging Canadians to donate their pennies to charities in order to make a difference in their communities.”

Ian E. Bennett, president and chief executive officer of the RCM, said: “The Mint has proudly produced the penny to satisfy the needs of Canada’s trade and commerce for over one hundred years. Although today marks the end of an era for this denomination, the Mint has a solid international reputation on which to build a future without the penny.”

Though the RCM has ended cent strikes for circulation, collectors may wonder whether the agency will continue to strike Canadian cents as solely collectible items that are featured in special or annual sets produced by the RCM.

When asked if the RCM has plans to continue circulation-quality cent strikes for collectors, Alexandre Reeves, RCM senior manager of communications, said May 9: “It’s still too early to make specific product announcements involving the penny, though we are working on some collector products. [RCM President Bennett said] at the last strike event that the last one million pennies struck for circulation will be sold as collector products. There were open bins of those coins in front of the podium at the event.”

The government of Canada announced in its Economic Action Plan 2012 that it would modernize Canada’s currency set by eliminating the cent from Canada’s coinage system.

The government cited rising labor, metal and other manufacturing and distribution costs as involved in the decision, and stated that each cent now costs more than 1.6 cents to produce.

The cent will still remain legal tender, but in the fall of 2012 the RCM will stop distributing the coins for circulation.

According to a statement posted at the RCM’s website: “The penny will retain its value indefinitely and can continue to be used in payments. However, as pennies are gradually withdrawn from circulation, price rounding on cash transactions will be required.”

Payments made via electronic means will not be affected.

The end of production of the cent follows on the heels of other moves by the Canadian government to minimize costs in striking that country’s circulating coinage.

The nation’s new $1 and $2 coins are composed of steel and plated with multiple, alternating layers of copper and nickel.

For more details on the elimination of the cent, guidelines on price rounding and further information on Canadian coinage, including technical specifications, visit the RCM website at www.mint.ca.

For more information about the Currency Museum of the Bank of Canada, visit the museum website at www.currencymuseum.ca/, telephone the institution at 613-782-8914 or contact the museum by email at museum-musee@bankofcanada.com. ¦