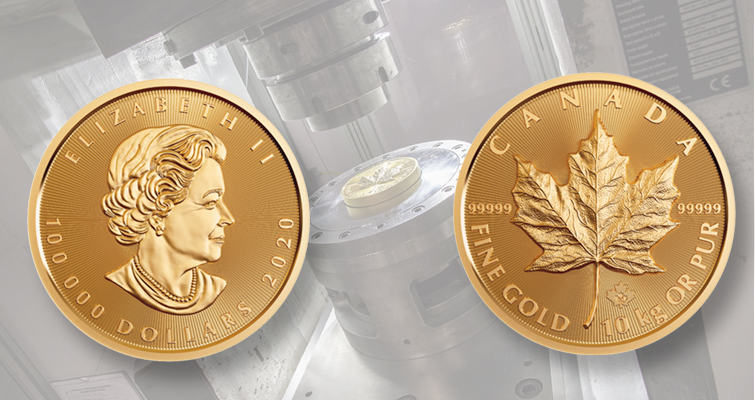 The Royal Canadian Mint’s latest coin is a big effort to grab attention.

The Royal Canadian Mint has produced the largest Maple Leaf gold coin ever made, struck in high relief at the mint’s Ottawa facility.

“Their price is based on a combination of the gold market rate at the time of purchase, plus a premium for manufacturing and a very low mintage,” according to a statement from the RCM.

This Maple Leaf 10-kilogram .99999 fine gold coin carries the typical design of a sugar maple leaf on the reverse.

That design distinguishes the coin from the 2007 whopper of a gold coin from the RCM, which depicts the leaves of a silver maple tree and is made from 100 kilograms of .99999 fine gold with a $1 million face value. The 2007 coin is also much wider (at 530 millimeters in diameter compared to 180 millimeters for the 2020 coin).

The 2020 coin is limited to 10 pieces, of which five are already sold, according to Alex Reeves, senior manager of public affairs for the RCM.

The coin was on display during the Prospectors & Developers Association of Canada’s annual convention in Toronto to promote the RCM’s Maple Leaf gold bullion coin series, the only world bullion coin struck in “five nines” fine pure gold.

“Its maple leaf-shaped security mark, the dazzling array of radial lines filling the reverse and obverse of the coin, and the trademark Walter Ott-designed sugar maple leaf shining from the coin’s centre in matte proof finish are magnified in stunning scale,” according to the RCM.

The obverse of the coin features the effigy of Queen Elizabeth II created by portrait artist Susanna Blunt in 2003.

This is not the first 10-kilogram gold coin the Royal Canadian Mint has issued — that milestone fell in 2011 when the RCM issued the Spirit of Haidi Gwai coin. 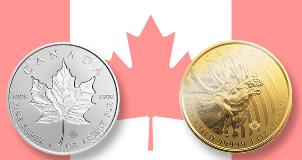 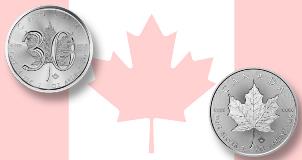