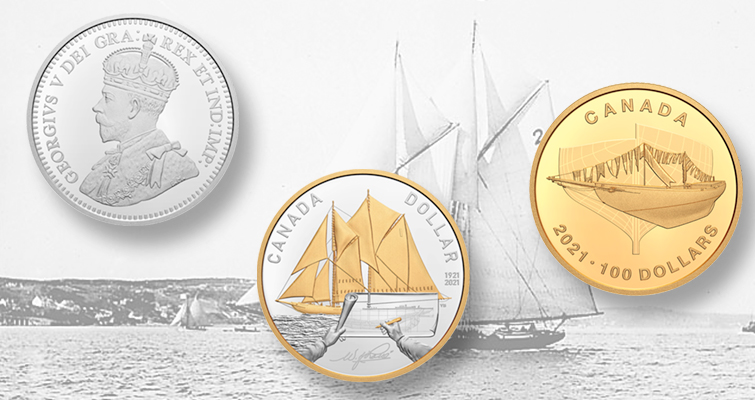 Canada celebrates the fishing schooner “Bluenose” on several coins in 2021, including this selectively gold plated Proof silver dollar, available only as part of the annual Silver Proof set.

The Royal Canadian Mint is launching a year-long celebration of the schooner Bluenose with several coins dedicated to the famously swift sailing ship.

One hundred years ago, Bluenose emerged from the Smith and Rhuland shipyard in Lunenburg, Nova Scotia, and sailed into the hearts and minds of Canadians as the fastest and most graceful fishing schooner the world had ever seen. The pride felt by its architect, William James Roué, and of those who built and crewed it, continues to be shared from coast to coast to coast.

In its first season, Bluenose both hauled in a record catch on the Grand Banks and brought the International Fishermen’s Trophy back to Nova Scotia. It remained the undefeated champion in this racing series and proudly defended the title “Queen of the North Atlantic Fishing Fleet.”

The beloved Bluenose found a home on the 10-cent coin when Canada’s circulation coins were redesigned in 1937 to celebrate Canada’s favorite national symbols.

Now the ship is being honored on the annual Proof silver dollar and a Proof gold $100 coin.

Canadian marine artist Yves Bérubé captured the vision of Roué on the reverse of the 2021 Proof silver dollar.

His design illustrates both the dream and reality of the project: part of the original plans of Design No. 17, which would become Bluenose, the legendary schooner under full sail.

The architect’s hand can be seen finishing the drawing, as is an engraving of his signature, as it appeared on the original Bluenose sail plan.

The obverse features the effigy of King George V, who was Canada’s monarch in 1921.

The same design is used for the annual Silver Proof set but is enhanced with selective gold plating.

The set is composed of silver versions of Canada’s circulating denominations, including a special 1921–2021 double-dated 10-cent coin.

To design the reverse of the gold $100 coin, RCM engravers drew from a historical photograph and Roué’s hull design to show two perspectives of Bluenose.

The newly finished hull, adorned with signal flags at its March 26, 1921, launch, appears to float over a cross-sectional diagram showing both the bow and stern of Bluenose.

The plain Proof silver dollar has a mintage limit of 30,000 pieces and retails for $69.95 Canadian. It becomes available Feb. 2.

For more information, or to order, visit the RCM website, www.mint.ca. 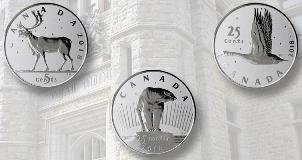 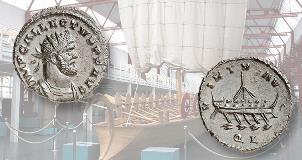