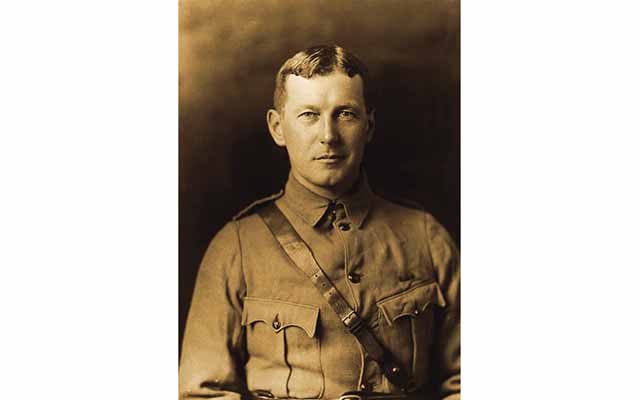 Lt. Col. John McCrae was a Canadian officer during World War I when he authored what has become the signature verse affiliated with World War I, “In Flanders Fields.”

The author of the famous World War I poem “In Flanders Fields” is slated to be honored on 2015 circulating commemorative 25-cent and $2 coins from Canada.

RELATED: The Poppies glow in Flanders Fields (and on Canadian coins, too)

Each of a pair of 25-cent coins will show a large poppy in the foreground, surrounded by smaller poppies in the background, with the artist’s initials, TB, to the left of the design, and the inscriptions CANADA at the top of the coin and REMEMBER•SOUVENIR in a banner at the bottom of the coin. The RCM has not disclosed the names of the artists.

For the $2 coin, Lt. Col. McCrae will be shown on the reverse, writing “In Flanders Fields,” on a battlefield, surrounded by birds, crosses and poppies, with an artist’s initials, GL to the left of the design, and two security marks described as virtual images of a maple leaf between two lines at the top of the coin and two lasermark maple leaves, each within a circle, at the bottom of the coin, with the inscriptions REMEMBER, 2015 and SOUVENIR.

The virtual image is produced by engraving different patterns on each side of two-sided grooves on the face of the coin.

The Susanna Blunt effigy of Queen Elizabeth II will appear on the obverse of each of the three coins.

No release date or mintage information is yet available.

Canada issues many circulating commemorative coins. Coin World reports on them all!