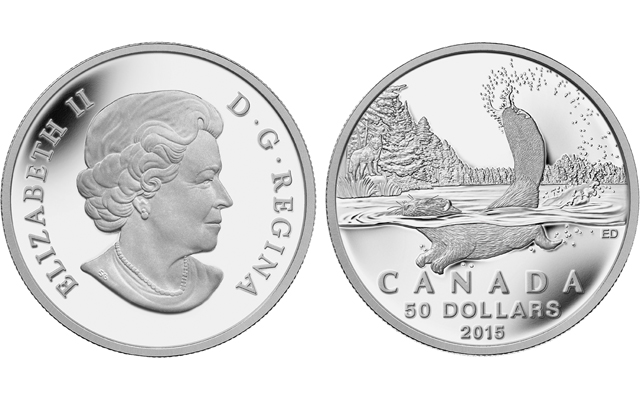 Damstra’s design captures a beaver from a unique and dramatic perspective.

The top half of the image shows the beaver swimming across a lake, its head and tail raised above water. Water sprays from the lake surface where the beaver has slapped its tail to warn others of a nearby wolf. On the left side of the image stands the wolf, its forepaws on a boulder that juts out into the water, its gaze fixed on the fleeing beaver. The weedy shoreline curves to the right side of the coin. In the distant background, conifers reach for the sky.

As though the scene were captured through a half-submerged lens, the bottom half of the image shows the underwater portion of the beaver. Here we see the beaver’s dextrous forepaws and flipper-like hind feet in action, paddling the animal quickly away from the nearby predator.

The Royal Canadian Mint began accepting orders for the coin on Dec. 5, but delivery will not begin until Feb. 10.

The coin is available inside Canada and the United States at face value, with free shipping, limited to purchases of three coins per address.

To order from the Royal Canadian Mint, visit its website.

Distributors will also offer the coin at their own fixed prices. Talisman Coins can be reached online. Visit Gatewest Coins’ website.