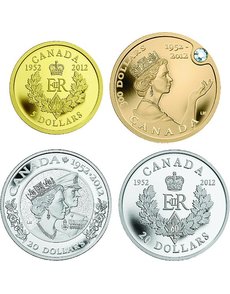 With four 2012 coins debuting Oct. 11, the Royal Canadian Mint continues the countdown to Queen Elizabeth II’s Diamond Jubilee, the 60th anniversary of her accession to the throne in 1952.

The RCM on Oct. 4 announced two new 2012 silver $20 coins and gold $5 and $300 coins, the four pieces joining a previously released silver $20 coin for the milestone, which occurs in June.

One of the silver coins and the gold $5 coin share a similar design (with the exception of the denominational inscription) depicting the queen’s royal cypher, which is a monarch’s identifier, much like a coat of arms.

Cyphers have been used by British royals since the time of Henry VIII. They generally feature the monarch’s initial and titles, often beneath a symbol of rule, such as a crown. Unlike monograms, which interweave letters, royal cyphers display each letter distinctly.

Queen Elizabeth II’s cypher, eiir, features her initials, e ii (Elizabeth II), and her title initial, r (for regina, Latin for queen), below an image of St. Edward’s Crown, which has been used for British coronations since the restoration of the monarchy and coronation of Charles II in 1661. The queen’s initials and crown appear at the center of the shared reverse design.

The shared design also features a garland of maple leaves partially enclosing the eiir and crown. At the bottom center of the garland, joining the two branches, is a maple leaf overlaid by a diamond outline showing the numerals 60.

The royal cypher is imprinted in the insignia of orders, decorations, medals and on badges. In Canada — a constitutional monarchy that recognizes the queen as its head of state — it is common for this cypher to be surrounded by a wreath or garland of maple leaves, symbolizing the unique union of the queen’s power and the sovereignty of the Canadian people.

The shared reverse design is not credited to any particular artist. The engraver was Christie Paquet, senior mint engraver of the RCM.

Created by Canadian portrait artist Laurie McGaw, the queen and prince gaze off the coin at the viewer’s right, mostly inside a circle that is framed by two decorative elements containing a shamrock, a rose, a thistle and maple leaves to symbolize the common bonds between Canada and the United Kingdom. The nation’s name, the dual dates 1952-2012 and the denomination appear inside the outer field.

The Royal Cypher and Prince Philip-Queen Elizabeth II silver $20 coins in the Oct. 11 launch will be available in a three-coin set. The third coin in the set is a Proof Queen’s Diamond Jubilee .9999 fine silver $20 coin with crystal, which was issued May 2.

The set, which is presented inside a box emblazoned with the queen’s royal cypher, retails for $274.95.

A Canadian-mined Ekati diamond embedded in the Proof .99999 fine gold $300 coin is a physical link to the Diamond Jubilee in what the RCM calls “a grand tribute to the occasion.”

According to the RCM, the diamond is locked inside the coin’s rim as the coin itself is struck using a proprietary process, making the RCM “the first mint in the world to issue a coin integrating a genuine diamond.” The diamond (weighing from 0.11 to 0.14 carats) was mined by Canadian mining concern Ekati. The coin is accompanied by a serialized certificate confirming the diamond’s authenticity, weight and clarity of VS or better and a color of I or better, according to the RCM. (Despite the RCM’s statement about the coin being a “first,” coins from other nations integrate a diamond, including a Treasures of Australia coin from the Perth Mint that includes diamonds inside a capsule that is inserted into the center of a coin.)

The reverse of the gold $300 coin, also designed by McGaw, shows a portrait of a young Queen Elizabeth II, with her hand outstretched as if to touch the diamond symbolizing her 60-year reign. The nation’s name joins the dual dates of 1952-2012 and the denomination on the reverse.

Susanna Blunt’s effigy of Queen Elizabeth II appears on the obverse of all of the Canadian coins in the Oct. 11 launch. ¦