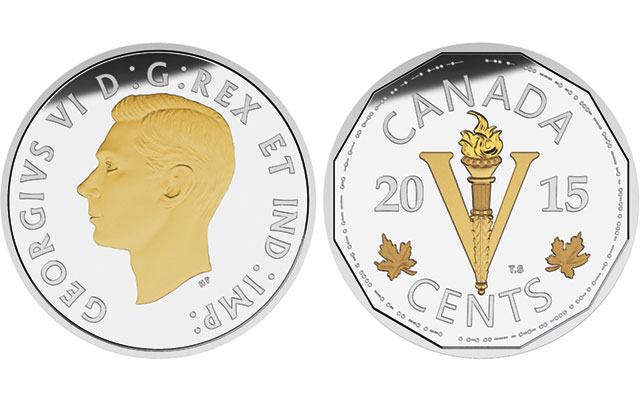 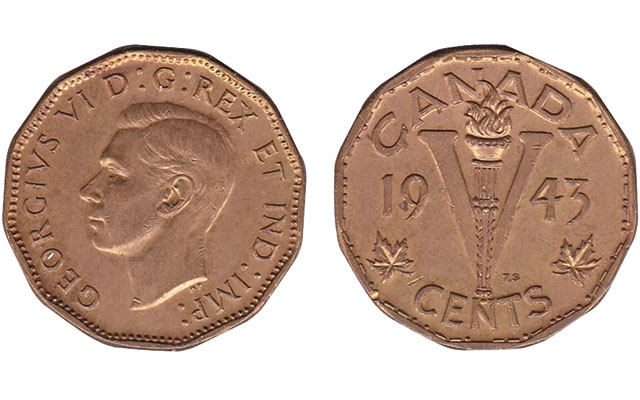 In 1943, Canada’s 5-cent coin design was modified, to use the reverse as a rallying boost to the nation. Besides the “V for Victory” (also representing the 5-cent denomination) design, the coin features Morse code that translates to a winning message.

When the world went to war, Canada’s coinage did too, in one sense.

Beginning in 1943, the design for Canada’s 5-cent coin was changed to promote a spirit of wartime victory to boost the nation as the war continued.

The special “V” or “Victory” 5-cent coin was issued through 1945, with an alloy change in 1944 to save nickel for the war effort (similar to changes affecting U.S. coinage during the same period).

The Royal Canadian Mint celebrates the 1943 5-cent coin’s design on the third release in the Legacy of the Canadian Nickel coin program. The coin was released on April 7, with the fourth coin in the series scheduled for release May 12.

The program provides a retrospective look at the history of 5-cent coins minted by the RCM since 1908.

Each new coin faithfully reproduces the original design, including the effigy of the reigning monarch at the time of the coin’s original issue date.

The 2015 Victory 5-cent coin’s obverse features the effigy of King George VI (by Thomas Humphrey), the reigning monarch from 1936 to 1952. The portrait is highlighted with selective gold plating.

A flaming torch in the center represents the sacrifice made by Canadians at home and on the battlefields of World War II. Behind it, the “V” has a double meaning, a representation of both Sir Winston Churchill’s famous “V for Victory” hand sign and the coin’s face value as a Roman numeral. Two maple leaves stand on either side of the V.

Within the recesses of the original coin’s 12-sided rim, the rallying cry “We Win When We Work Willingly” appears in Morse code.

The positioning of the modern version is slightly different. Also appearing on the modern coin’s reverse is the word CANADA and the year 2015.

It currently is available from Talisman Coins and from Gatewest Coins, for $84.95 in U.S. funds.