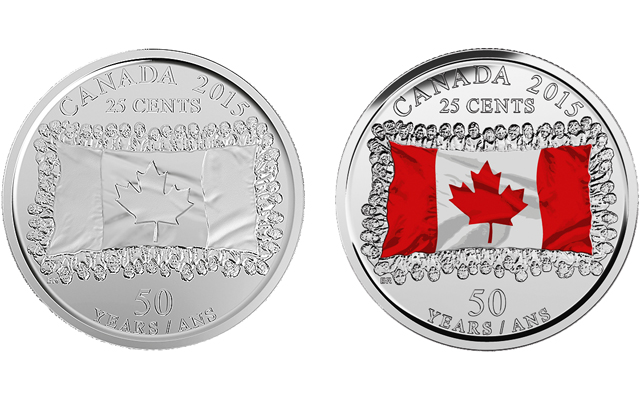 The Royal Canadian Mint has issued a 2015 circulating commemorative 25-cent coin to celebrate the 50th anniversary of the Canadian flag. The colored version and plain version are available in equal numbers.

The Royal Canadian Mint on June 9 unveiled a 2015 circulating 25-cent coin to mark the flag’s anniversary. Of the 12.5 million coins produced, half (6.25 million) feature the familiar Maple leaf flag in red-on-white color. The other half of the mintage sports no color.

Designed by Nova Scotia artist Bonnie Ross, the reverse of this new 25-cent circulation coin illustrates the national flag surrounded by 50 children, each of whom represents one of the flag’s 50 years, as well as Canada’s future. Inscriptions 50 YEARS / ANS appear at the bottom center of the design.

The flag anniversary is an important step in the countdown toward the 150th anniversary of Canadian confederation in 2017, according to the RCM. In 2017, the RCM will issue circulating coins with designs created by citizens.

The 2015 Flag coins were released into circulation the same day as the unveiling ceremony for their design, held at center field in Toronto’s Varsity Stadium before the kick-off to a CFL exhibition game between the Toronto Argonauts and the Winnipeg Blue Bombers.

Residents and collectors may obtain the coin by attending coin exchanges at special events in select locations across Canada, as the RCM announces them at www.mint.ca.

In addition, the coins are available at the RCM’s Ottawa, Winnipeg and Vancouver boutiques.

Canadian residents may obtain limited quantities through an online coin exchange at www.mint.ca/flag. There, a 10-coin pack containing five examples of each version is available at face value.

The Flag circulating coin joins several other collector coins marking the anniversary of what is likely the most visible symbol of the nation.

For more information about the coins, visit the RCM website.