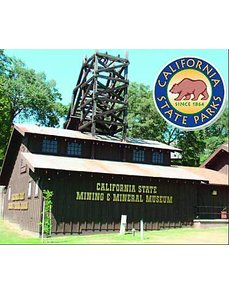 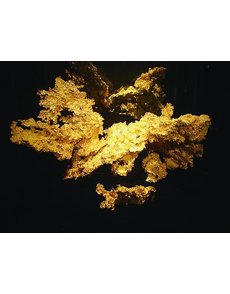 The Fricot nugget, the largest intact mass of crystalline gold remaining from the gold rush era, was not taken during the robbery of the California State Mining and Mineral Museum in Mariposa, Calif., Sept. 28.

Investigators continue to search for at least two suspects and the estimated $2 million in gold nuggets and precious gems taken in an armed robbery Sept. 28 from the California State Mining and Mineral Museum.

The museum is located in Mariposa, Calif., in the foothills of the Sierra Nevada Mountains near Yosemite National Park. The museum housed the 132-year-old collection of gold nuggets and mineral specimens.

The robbery report was made by museum employees around 4 p.m. Sept. 28. The museum is closed “until further notice while repairs are completed,” stated a news release from Roy Stearns, deputy direction of communications for the state parks office.

“A number of display cases, doors and other items were damaged,” according to the news release, dated Oct. 1.

A California Highway Patrol spokesman confirmed that the nearly 13.8-pound Fricot nugget of crystalline gold — one of the museum’s treasures — was not taken.

According to police reports, when the suspects attempted to enter the vault where the giant nugget was kept, they triggered an alarm.

Two female employees were at the museum at the time of the robbery but neither one was injured. They reported two male suspects, dressed head to toe in black, wearing masks and possibly night vision goggles, were carrying pickaxes when they entered the museum.

The CHP Investigative Services Unit is leading the investigation, according to Stearns. The CHP unit is being assisted by the California Department of Justice, California State Parks and the Mariposa County Sheriff’s Department.

The mineral collection on display in Mariposa dates back to 1880 and contained more than 13,000 objects including mining artifacts, rare specimens of crystalline gold in its many forms, as well as gem and mineral specimens from California and around the world.

The collection was moved to Mariposa in 1983 after being on display in San Francisco for more than 100 years. The Mariposa museum became a state park in 1999.

Officials ask that anyone having information about the theft in Mariposa or about someone trying to sell unusual precious minerals call the CHP at 559-277-7250.

The Mariposa museum robbery was the third theft in 10 months involving gold and other rare and valuable minerals in California.

The display that was targeted by the thieves featured historic gold nuggets mined in the area and other mining memorabilia from this far northern California county that borders Oregon.

Police received a report of the break-in around 7 a.m. Feb. 1. One of the surveillance cameras in the lobby shows two males breaking into the gold cases around 1 a.m.

Officials estimated the value of the stolen gold at about $3 million total. The silent alarm was not triggered during the break-in. According to report, the thieves apparently entered the building through an unlocked window in the rear of the courthouse.

Another theft occurred in the early hours of Dec. 10, 2011. The Santa Barbara Museum of Natural History was burglarized of its collection of gold dating to the California Gold Rush era.

Included in the burglary were gold nuggets, flakes and other small pieces of gold.

Officials valued the stolen items at more than $4,000, according to a news report by KEYT, the ABC television affiliate in Santa Barbara. ¦