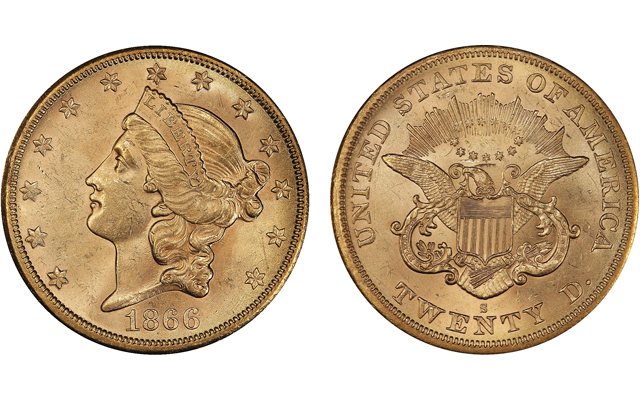 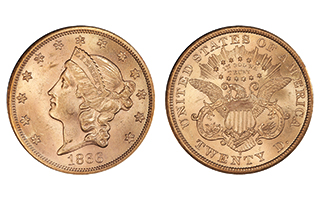 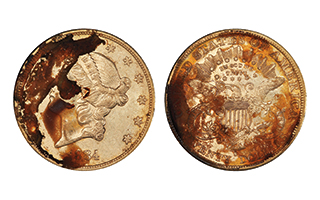 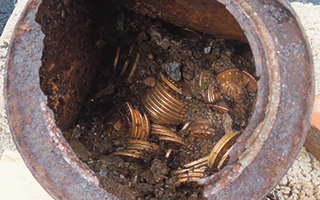 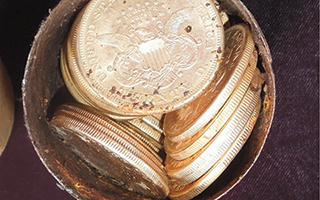 A California couple’s daily outing with their dog led to an amazing and unexpected discovery: a buried gold coin hoard whose value a dealer says could top $10 million.

What is being called the “Saddle Ridge Hoard” consists of 1,427 19th century gold coins found in eight metal canisters in California’s gold country. The majority of the coins, which range from 1847 to 1894, are Coronet $20 double eagles struck at the San Francisco Mint from 1855 to 1894.

The coins have been certified by Professional Coin Grading Service, and more than a dozen of the coins are either the finest or tied for the finest PCGS has graded for the specific date and Mint.

Selected coins from the hoard were displayed at the recent American Numismatic Association National Money Show in Atlanta.

PCGS President Don Willis said in a Feb. 26 press release that was distributed on Feb. 25: “The Saddle Ridge Hoard discovery is not only one of the most amazing numismatic stories I’ve heard, it also is an incredible human interest story! This is one of the best stories in the history of our hobby.“

The coins were discovered by a couple while they were taking their dog on its daily walk on their northern California property in February 2013.

David McCarthy, senior numismatist at Kagin’s, in Tiburon, Calif., performed the initial evaluation and inventory of the treasure; Kagin’s will be marketing the hoard.

He said that the couple had walked this path for years and one day saw an old rusty can that had popped slightly out of the ground. The hoard got its name from the couple’s nickname for the property: Saddle Ridge.

McCarthy called his experience in working with the couple and the coins “Incredible.”

“We all dream about discovering buried treasure; seeing the real thing in person — piles of gold coins encrusted in dirt and rust,” McCarthy added.

The story was picked up by the Associated Press on the afternoon of Feb. 25 and immediately attracted wide news coverage across the world. “This is the proverbial pot of gold at the end of the rainbow,” said Don Kagin, Kagin’s president.

In an interview with ABC News, Kagin said that the family used a stick to dig that first can out of the ground — showing the stick that the couple used — and they initially thought that the can was full of paint. They went back with a metal detector and found seven other cans.

Kagin said that what differentiates this hoard, beyond the obvious quality of many of the coins, is that it includes a wide variety of dates. Kagin believes that, based on the dates of the coins included in the find and the condition of the metal cans they were stored in, the coins were buried over a significant period of time in the late 19th century.

Kagin’s estimates the current market value of the group at more than $10 million and believes it to be one of the greatest buried treasures ever unearthed in the United States.

McCarthy said one 1891-S Coronet double eagle is a counterfeit, in the consensus opinion of the PCGS grading experts. McCarthy said the surface fabric of the piece is unusual and he plans to conduct additional research and analysis to confirm whether it is a well-made fake or is, in fact, genuine.

McCarthy said the couple who discovered the gold coin hoard soon after hired an attorney who researched what entity might best examine the coins. The attorney was separately directed to McCarthy and then Kagin’s.

McCarthy said he knows of at least one other coin dealership that was contacted by the couple’s attorney before Kagin’s was selected to handle the dissemination of the hoard.

The quality of the Mint State coins is unlike most others he has seen, since they were in the cans in the ground for more than 120 years and away from being handled or artificially treated, he said.

“This lot of coins is the freshest,” McCarthy said, compared to what he is used to seeing.

McCarthy said about 190 of the coins from the hoard are encapsulated in PCGS Genuine-designated holders because of environmental or other damage. Among them is an 1852-O Coronet double eagle.

McCarthy said a number of the earliest dates in the hoard had suffered some sort of cleaning before he examined any of the coins. McCarthy said he has no way of knowing whether the cleaning was done before the coins were placed in the ground or after they were removed.

“The first group of coins were unfortunately ‘conserved’ at some point,” McCarthy said.

McCarthy said it was his understanding that after the couple removed the coins from the cans, the coins were placed into plastic baggies and numbered.

It appears whoever put the coins into the ground apparently didn’t sort them by individual date, although the coins in each bag represented specific decades, McCarthy said.

Even with extensive research and information already known, McCarthy said it is doubtful anyone will be able to pinpoint exactly who placed the coins in the ground and when. McCarthy believes the hoard was built up over time, with the cans placed in the ground at different intervals as the number of coins accumulated increased.

Although the discovery site is relatively small in square footage, there were multiple terrain levels.

McCarthy said he spent nearly four months “triaging” each bag of coins to determine the best way to preserve each individual coin.

Most of the coins just required soaking in hot water to remove dirt and other encrustations, from the ground environment and from being housed inside the metal containers, McCarthy said.

“I wanted to use the gentlest, most natural way to remove the dirt and silica and maintain the integrity of each piece,” McCarthy said.

Kagin’s said that through an exclusive arrangement with the online retailer Amazon.com, approximately 90 percent of the coins will be made available for purchase via Amazon’s collectibles store. This will be the first major rare coin treasure to be sold through Amazon, according to Kagin’s.

The coins that will be featured through Amazon will appeal more to persons interested in treasure coins versus serious numismatists, McCarthy said.

“We wanted to put the coins someplace where everyone would know about them,” McCarthy said. “It’s the easiest way to make coins available to people who are not necessarily numismatically inclined.”

The marketing will begin in May, he said.

“We’re still in the grading process and the pricing process,” McCarthy said.

McCarthy said each customer who buys one of the coins from the Saddle Ridge Hoard will receive a one-year free membership in the American Numismatic Association, courtesy of Kagin’s.

Persons who just inquire about the coins in the hoard will be provided a three-month “virtual” ANA membership.

The ANA memberships are one of the ways that Kagin’s is giving back to the hobby and drawing new collectors to numismatics, McCarthy said.

Details will be posted on the Kagin’s website, located at www.kagins.com.

McCarthy said he anticipates writing extensively about the coins in the hoard based on his own research.

While the couple who found the coins wishes to remain anonymous, in a Feb. 10 interview distributed by Kagin’s they are identified by their first names of John and Mary. The two are in their 40s, and are self-employed.

When asked in the interview if they had ever noticed anything peculiar in the area where they made the find, John said: “Years ago, on our first hike, we noticed an old tree growing into the hill. It had an empty rusty can hanging from it that the tree had grown around — that was right at the site where we found the coins. ... At the time we thought the can might be a place for someone to put flowers in for a gravesite — something which would have been typical at the time. There was also an unusual angular rock up the hill from where the coins were buried.”

Mary added, “It wasn’t until we made the find that we realized it might have been a marker: starting at the rock, if you walk 10 paces towards the North Star, you wind up smack in the middle of the coins!”

Initially the couple thought that the can contained lead paint. When asked how long it took for the couple to realize that they had something special, John said; “Right after making the comment about it possibly being paint, the lid cracked off and exposed a rib of a single gold coin. I knew what I was looking at immediately. I looked around over my shoulder to see if someone was looking at me — I had the idea of someone on horseback in my head. It’s impossible to describe really, the strange reality of that moment ... I clamped the lid back on — I found a can of gold coins and I thought there was a zero percent chance of Mary believing me! When I told her, the look of bewilderment — her mouth was so wide open flies could have flown in and out several times.”

John described the moment when they realized what they had found as “surreal,” and Mary said, “It was like finding a wonderful hot potato.”

When asked about what the windfall means to the couple, John said, “Like a lot of people lately, we’ve had some financial trials. I feel extreme gratitude that we can keep our beloved property [land].”

Mary concluded: “We’re the same people we were before, just with more freedom of choice. Our finances won’t have to dictate so many of our day to day decisions.”