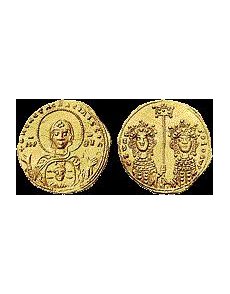 A histamenon of the Byzantine empresses Zoe and Theodora from their short joint reign from April to June 1042, in Extremely Fine condition, realized €57,500 ($76,938 in U.S. funds), including the 15 percent buyer’s fee.

Other highlights include a circa 214 to 212 B.C. gold diobol from the Sicilian city of Syracuse struck during the so-called Fifth Republic, before the city was conquered by the Romans and consequently lost its political autonomy. In EF, the coin realized €41,400 ($55,395 U.S.).

Another standout of the auction was from the Italian offerings, where every lot was sold.