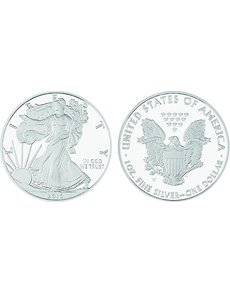 After the U.S. Mint raised prices for its Proof 2011 American Eagle silver bullion coin, secondary wholesale market prices for the 2011 coins and earlier examples rapidly rose by $10 a coin.

Bullion continues to drive the market, and the U.S. Mint’s recent repricing of many of its precious metal coins directly and quickly impacted the secondary market.

Secondary market prices for Proof American Eagle gold bullion coins have also risen as primary market prices increase, supplies shrink, and rumors continue to circulate that the Mint may shut off the supply of Proof 2011 issues as it did in 2009

At the recently completed American Numismatic Association World’s Fair of Money, many dealers with brick and mortar storefronts complained of losing business at the show by not being home at their stores.

Shop owners are the busiest they have been in a decade, as the public seeks both to liquidate gold and silver coins and jewelry and to perhaps purchase some gold or silver coins as an investment.

As increased pressure from non-numismatic gold buying storefronts lowers coin and jewelry shop profit margins in some communities, fast gyrations in precious metal prices can have a big impact on a dealer’s bottom line, especially if he or she is already working with relatively small profit margins on scrap/bullion metal purchases.

Platinum found a new three-year high at $1,900 an ounce Aug. 22, as investors realized that platinum — which is rarer and this generation has been more expensive than gold — was priced at the same level.

For example, May 23, 2008, platinum was near its all-time high at $2,170 an ounce while gold on that date was at $924 an ounce. A key difference is that gold is considered a safe haven while platinum demand stems in large part from its many industrial uses. ¦