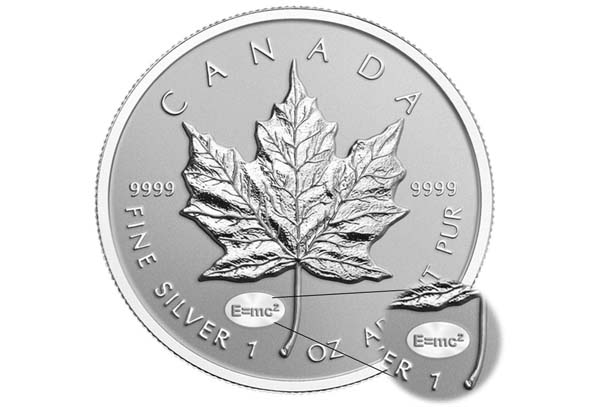 Bullion Exchanges in collaboration with Manfra, Tordella, & Brookes, and the world class refinery Royal Canadian Mint are pleased to release the 2015 1 oz. Canadian Maple E=mc2 Privy Reverse Proof Silver Coin commemorating Albert Einstein’s 100 year anniversary of the General Theory of Relativity today. The Royal Canadian Mint produced this custom design with a limited mintage of only 50,000 coins. These coins are in brand new, mint condition, and since they are a Bullion Exchanges exclusive the only place you can purchase them worldwide is with us!

This coin is a must have for Special Theory of RELATIVITY FANS! Physicists, astronomers, historians; anyone with a passion for science and Einstein’s genius will cherish this original and upscale keepsake. The 2015 1 oz. Canadian Maple E=mc2 Privy Reverse Proof Silver Coin is the first release in a series which is currently in the production phase.

The reverse design features the bullion coin’s Silver Maple Leaf in a reverse proof finish; the privy mark commemorates the Special Theory of Relativity with the groundbreaking formula E=mc2. The obverse features a right facing effigy of Her Majesty Queen Elizabeth II by Susana Blunt.

The 2015 1 oz. Canadian Maple E=mc2 Privy Reverse Proof Silver Coin featuring a brand new design, with a unique reverse proof finish which is rare in coins produced by the Royal Canadian Mint is composed of 1 troy ounce of  .9999 fine silver and bares a $5 denomination.

These 2015 1 oz. Canadian Maple E=mc2 Privy Reverse Proof Silver Coins are being struck at the Royal Canadian Mint in reverse proof finish. The mintage of these coins will be strictly limited to only 50, 000 coins making them highly collectible and sure to be sought out.

Single coins will be packaged in protective plastic coin flips. Multiples of 25 will be packaged in the original Royal Canadian Mint tube. Orders of 500 coins or more will be packaged in “Monster Boxes”. Bullion Exchanges offers free shipping on all domestic orders, which will be accepted both by phone and online. All prices are quoted in US dollars are determined based on the current spot price.

It was in 1915 when Einstein completed his masterpiece, the General Theory of Relativity – cutting-edge ideas on gravity and the motion of large scale objects like stars, plants, and galaxies. An earlier form of Einstein’s iconic formula had been unveiled ten years prior as part of his Special Theory of Relativity (1905). It described what happens when objects reach the speed of light – a concept that must have seemed pure science fiction 110 years ago.

This unique coin is attractive to both the first-time precious metal buyer and the long-term investor.

“We are especially pleased to have had the opportunity to collaborate with the Royal Canadian Mint, a world renowned refinery and look forward to many projects in the future.” “The Royal Canadian Mint’s exceptional attention to detail, and innovative refining practices have made this process nothing short of thrilling!”

Located in the heart of New York City’s Diamond District, Bullion Exchanges is a trusted Precious Metals Retailer. Bullion Exchanges offers a vast retail selection of products including but not limited to, metals that range from the ever popular gold and silver to the newly emerging platinum and palladium.