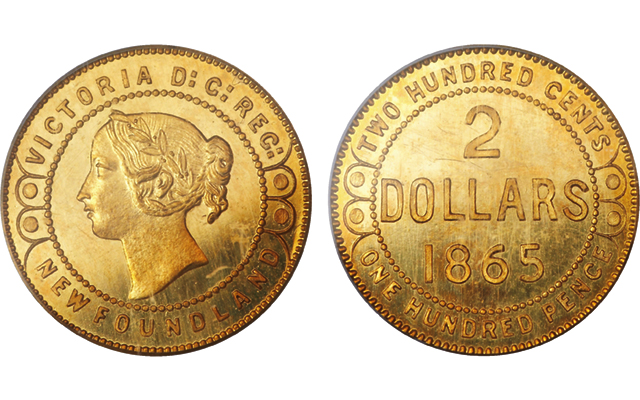 This Specimen 1865 Newfoundland gold $2 pattern with a portrait of Queen Victoria on the obverse sold at auction for $102,812.50.

Many great Canadian coins have passed through auction houses during 2014 so far.

Heritage Auctions sold a Specimen 1865 Newfoundland $2 gold pattern with a portrait of Queen Victoria on the obverse for $102,812.50 (U.S.) during the Chicago International Coin Fair April 10 to 12, 2014, in Rosemont, Ill. The pattern was graded Specimen 63 by Professional Coin Grading Service.

Sales like this demonstrate the strength in the market for rare and wonderful Canadian coins.

The latest edition of Coin World’s Canadian Coin Values has numerous price changes. Bullion prices have influenced a reduction in the values of many issues, especially in the gold issues. Gold prices have remained within the range of $1,200 and $1,350 for the past few months. We are at the low end of this range right now.

The price of gold, coupled with a slackening of demand for modern gold issues, has caused reductions in value for some issues by 10 percent to 20 percent.

A positive development is that earlier Canadian coins in entry level grades continue to enjoy brisk demand in the marketplace. The most popular are 1-cent issues, with many dealers clamoring for the key date small cents, 1922 to 1925. Three years ago, the market for these coins was slack but at the Toronto Expo May 30 and 31, 2014, I had at least 20 dealers asking for them.

Canadian large cents are also popular in Very Good to Fine grades. The first date of 1858 is actively sought after in entry level grades. Prices are higher for these issues.