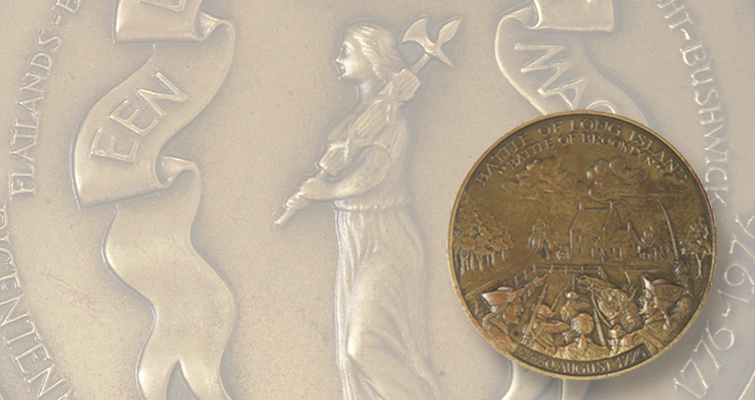 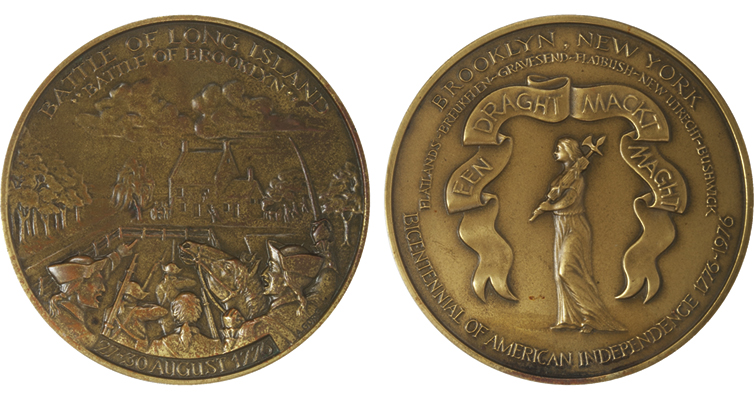 Medallic Art Co. struck this 63-millimeter bronze medal showing British forces attacking a strategic farm in the Battle of Brooklyn on the obverse.

No definitive catalog exists, though the 1978 Coin World Almanac published a roster based on information it had received over several years. New York City and the state issued medals prepared with the help of the American Numismatic Society, but among the unknowns are the two exceptionally attractive medals of the Borough of Brooklyn, one of the five boroughs consolidated into Greater New York in 1898.

Founded by Dutch colonists in 1636 to 1645 as Breukelen, it was joined by other settlements including Flatbush, Williamsburg, Flatlands, Graves-end, New Utrecht, and Bushwick to form the City of Brooklyn by the 1880s. Before the name became the butt of slightly hysterical jokes by vaudeville comedians, Brooklyn was known as the highly conservative “City of Churches.”

Brooklyn was of key importance in the American Revolution. Fresh from driving the British from Boston, George Washington brought his fledgling Continental Army to Long Island. He foresaw a British assault on poorly defended New York, whose patriots had just demolished the equestrian statue of King George III. The Americans under Gen. Israel Putnam and Lord Stirling suffered major defeats, notably at the Battle of Long Island, also known as the Battle of Brooklyn. Fighting at the Vecht-Cortelyou farm on Aug. 27 to 30 was a disastrous defeat, but the Americans escaped over the East River to Manhattan, beginning a long retreat that Adm. Richard Howe hoped would lead to a negotiated peace. Further retreats followed until winter overtook Washington at Valley Forge.

The Brooklyn Bicentennial Commission chose German sculptor Alfred Görig to design the medals. Görig presented a lively view of British forces attacking the strategic farm on the medal’s obverse. The reverse presented a figure of Freedom in an ancient tunic holding the fasces under a ribbon inscribed in Dutch EEN DRAGHT MACKT MAGHT, “Union Is Strength,” the motto not only of Brooklyn but of Belgium and the old Union of South Africa. Medallic Art Co. struck this medal and its sister honoring the Prison Ship martyrs of Wallabout Bay in 63-millimeter bronze. Numbers struck are not available. Both medals are scarce.