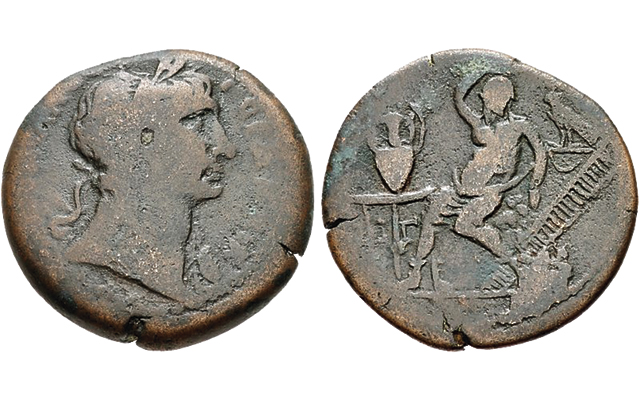 A circa A.D. 109 to 110 bronze drachm of Trajan issued in Alexandria, Egypt, honors a god of the annual flooding of the Nile River. It is estimated at $5,000 in Classical Numismatic Group’s auction No. 97, closing Sept. 17.

A bronze drachm of Trajan, issued in Alexandria, Egypt, has a fascinating story to tell.

The reverse of the circa A.D. 109 to 110 coin depicts the Egyptian god Hapi, god of the annual flooding of the Nile in ancient Egyptian religion.

One of only three coins known, the example is being offered in Classical Numismatic Group’s Internet and mail-bid sale No. 97, which closes Sept. 17.

The flood’s deposit of rich silt helped elevate Hapi into a symbol of fertility, and he is typically depicted as a man with a large belly wearing a loincloth, and having female-like breasts, according to the auction house.

The obverse of the coin shows Trajan, and the reverse includes a seated Hapi, his right hand raised. A nilometer (marker used to measure the flooding) and a hawk (Horus) on a column or table also appear.

Graded Fine by the auction house, the coin is worn and has an “even brown patina with touches of green, [and] some very minor porosity.”