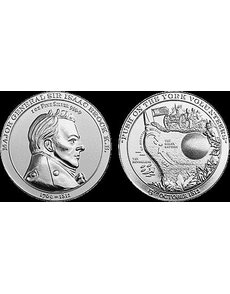 The reverse of the medal shows a composite of the military action at the Battle of Queenston Heights, where Sir Isaac Brock perished. The medal was designed by a member of the Brock family, artist Oliver Brock.

All images courtesy of www.isaacbrock.com.

Canada’s hero of the War of 1812 is honored on new silver and gold commemorative medals.

The 1-ounce .9999 fine medals honoring Maj. Gen. Sir Isaac Brock were struck by the Guernsey Mint & Bullion Co. and announced Oct. 2. They mark the bicentennial of the death of the man nicknamed the “hero of Upper Canada” for his heroics in defending the province despite being outnumbered. He humiliated the U.S. Army under the command of Gen. William Hull, who capitulated Fort Detroit.

The medals were designed by artist Oliver Brock, Gen. Brock’s first cousin six times removed, and carry a portrait of Sir Isaac Brock on the obverse, with a compound image of the Battle of Queenston Heights on the reverse, with the motto PUSH ON THE YORK VOLUNTEERS around the rim. The reverse also depicts a musket ball to represent the one responsible for taking Brock’s life.

The silver medal will have unlimited mintage, though the medals are being produced in different batches. The various batches will be identifiable from the batch number printed on the packaging.

Prices will be set daily according to spot prices for silver and gold. At press time, the silver medal was priced at £45 and the gold medal was being offered for £1,350.

For more information or to order, visit www.isaacbrock.com.

To learn more about the Brock Memorial Foundation, telephone Oliver Brock at +44 1481 722240 or direct email messages to him at oliver.brock@isaacbrock.com. ¦