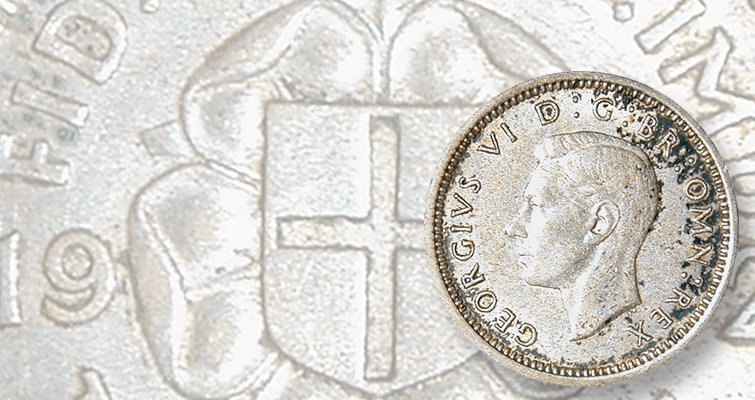 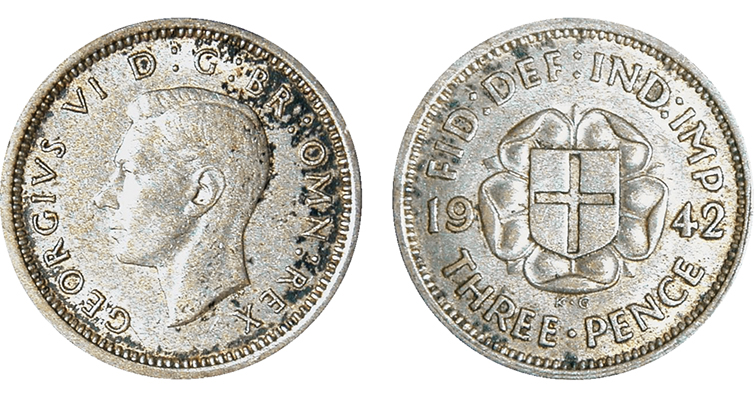 One would not expect to find a British silver threepence in a 50-coin roll of copper-nickel clad Roosevelt dimes, much less three, like Bill O’Rourke did.

Beginning with the Seated Liberty design in 1837, the diameter of the dime has been 17.9 millimeters, so finding coins with a diameter of 16.2 millimeters in a roll makes sense, even though I will never figure out why someone would have wrapped them up in the first place.

I was completely surprised to find three British three-penny pieces (say that three times, fast) in one of the rolls I examined. Two are dated 1942 and one is dated 1943. Each coin weighs about 1.14 grams and is struck in a 50 percent silver composition. That translates into each coin having a silver content equivalent in weight to 0.0227 ounce of silver. While that is not a huge haul, silver is silver!

The obverse of each coin features a portrait of King George VI, facing left encircled by the inscription GEORGE VI : D : G : BR : OMN : REX, which is the abbreviated form of Latin that translates into “George VI, By the Grace of God, King of all the British territories.”

The reverses of these coins have representations of a shield bearing the Cross of St. George, centered on a Tudor rose. The date is divided by the central design. The denomination is seen on the lower portion of the design while the inscription FID : DEF : IND : IMP, translated as “Defender of the Faith, Emperor of India,” is seen above.

This version of the threepence was minted for circulation from 1937 through 1945, with almost all of the 1945 issue melted. Don’t confuse this coin with the Maundy issues, which have a large numeral 3 beneath a crown on the reverse, or the threepence of a completely different design that was struck on a larger nickel-brass planchet and circulated alongside the silver issues.

I would consider these coins that I found to be scarce, with the 1942 issue having a reported mintage of 4,144,000 pieces and the 1943 coin, a reported mintage of only 1,379,000 coins. Even so, unless these coins are in exceptional condition, they are worth only about $2 each. For me though, it is the thrill of the hunt that fuels my never-ending drive to look through as many rolls of coins as I possibly can. It’s just plain fun!