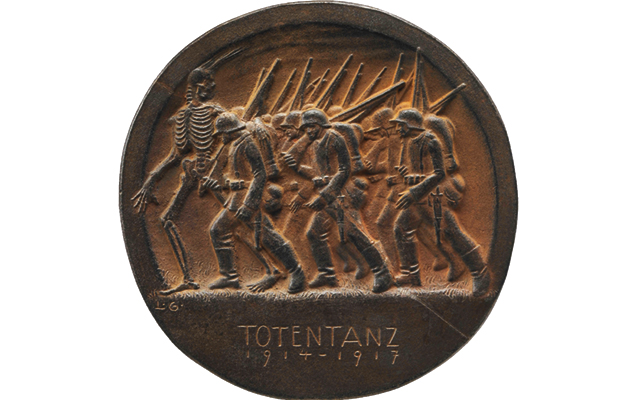 Death was a prominent theme on German medals of World War I, as seen on the “Totentanz (Dance of Death)” medal, a cast iron medal made from 1914 to 1917, by Ludwig Gies. 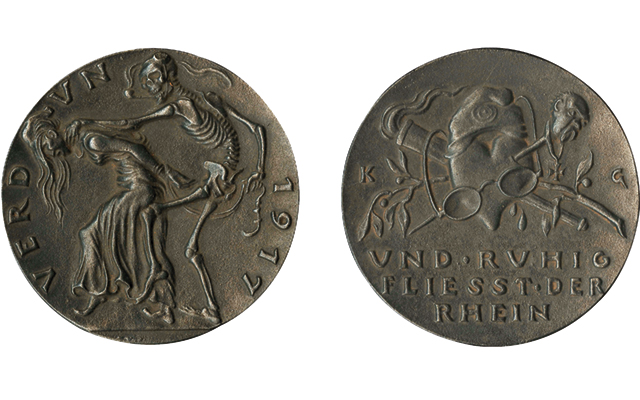 Karl Goetz was a prolific medalitst, and his “Verdun 1917” cast iron medal also shares a death motif. Death, smoking a pipe, walks left while clutching Le Semeuse (the Sower) by the neck. Her hands are tied behind her back, with Death holding the rope that ties her hands. Death is also kneeing her with his left knee. The reverse carries a line of poetry from Die Lorelei, translating to "and gently flows the Rhine," along with various symbols of the misery of battle. 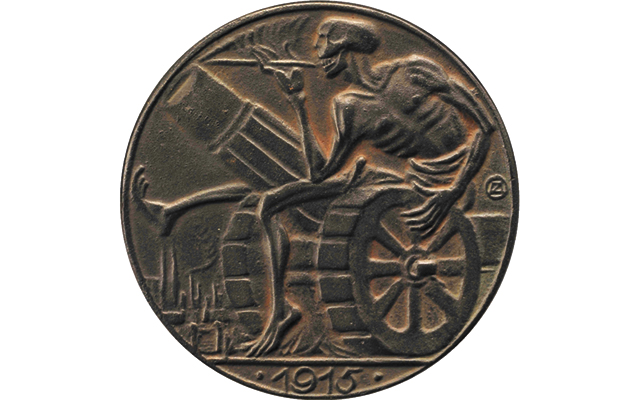 Artist Arnold Zadikow actually fought on the Western front. His exposure to the brutality of war is reflected in the 1915 medal, “Death and a Cannon.” 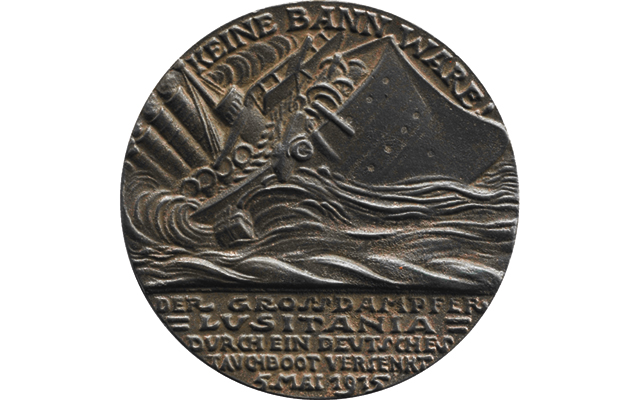 One of the most famous of all German medals is Karl Goetz’ Lusitania, issued in 1915 to mark the sinking of the passenger liner by a German U-boat.

A new exhibit at the British Museum tells the story of Germany’s World War I experience through medals.

“The other side of the medal: how Germany saw the First World War” was launched May 9 and is one of many centenary commemorations of the outbreak of World War I.

The new exhibit displays medals made by artists who lived and worked in Germany between 1914 and 1919.

“Challenging and at times deliberately provocative, a number of these medals were intended to influence popular opinion against Germany’s enemies,” according to the British Museum. “Others, however, provide a more universal criticism about the futility of war and waste of human life.”

Though enthusiasm for the war was initially high, it waned as the scale and brutality of war grew.

Reflecting upon this, German medalists revived the medieval Dance of Death motif to present an almost apocalyptic view of the conflict.

The figure of Death “becomes an active malevolent presence and indiscriminate force of destruction.”

Elsewhere, recent movements such as Expressionism were a powerful influence on the design of medals.

This led to the depiction of vulnerable sticklike figures, dominated by giant war machines in scenes that strip humanity of its individualism. German medalists were also keen to consider the collateral effects of war, depicting refugees displaced by invasion or people starving as a result of food shortages. By doing so they engaged with the totality of the First World War in a way that eluded most of the allied medals that were produced.

German medalists were unique among the warring nations, both in the volume of medals they produced and in the breadth of styles and production methods that they embraced and employed.

Some of the smaller struck medalets were mass-produced, but the larger cast medals, which are the main components of this exhibition, were produced in comparatively small numbers.

Wartime demand for bronze for the production of shell casings meant that medals were mostly cast in iron. The medals were unusually modernist in style, at least in comparison with the more decorative French tradition, serving to emphasize the brutality of the conflict.

French medals were typically made in an Art Nouveau style, full of allegorical allusions to the war. Unlike German medals, the French medals did not tend to question the moral implications of the conflict or confront its human cost. At the same time, very few British medals were produced in connection with the war.

German artists were affected by the war in different ways, and at least one of the medalists featured in the exhibition, Arnold Zadikow, fought on the Western Front. Though initially against the war, Zadikow was later swept up in the patriotic fervor that gripped the German nation and, since he loved horses, decided to join the cavalry.

Zadikow’s medals, most of which depict a version of the Dance of Death, show Death as a nonchalant figure, casually holding zeppelins on strings as if they were kites in the sky, or straddling a cannon smoking a cigarette as a city burns below.

In 1917 Zadikow was severely injured in the back and then captured by the British. He spent the remainder of the war interned in Brocton prisoner of war camp in Staffordshire, where he was given materials so that he could continue to sculpture.

The exhibit's medals, while not officially produced or sanctioned, nevertheless caused considerable controversy when they first appeared, including what may be the most famous of them all, one marking the sinking of the passenger liner Lusitania by a German U-boat.

This medal is perhaps medalist Karl Goetz’s most famous work and shows the vessel with imagery matching the German argument that the ship was fair to target because it had carried munitions.

The reverse shows Death selling tickets to passengers, with the caption “Business as usual.” British copies of the medal were even made and sold during a fierce propaganda campaign that attempted to incite public opinion against Germany.

In consideration of some of their propagandist qualities, wartime Britain regarded the German medals with outrage. In response, Sir Arthur Evans, archaeologist, numismatist and British Museum trustee, organized a prize competition of £100 in 1916 for the best British medal about the Battle of Jutland. The winning design features in this exhibition.

Realizing the significance of the German art medals as historical documents, the British Museum acquired many examples even before the end of the war.

A century later, “this display of medals from the collection offers a fresh perspective to our understanding of life and death during the First World War,” according to the British Museum.

The exhibit continues through Nov. 23 and is staged in room 69a during regular museum hours.

Special events are scheduled in conjunction with the exhibit, including a gallery discussion by Thomas Hockenhull, curator of the exhibit on Aug. 8 from 1:15 to 2 p.m.

Hockenhull will also present a lecture on July 13 from 1:30 to 2:30 p.m. in the Stevenson Lecture Theatre, with reservations recommended.