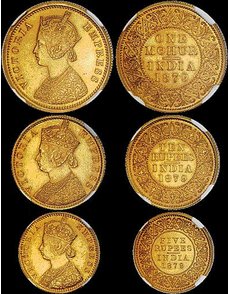 The coins are early Proof restrikes by the Bombay Mint.

The practice of restriking Indian coins is almost as old as the “uniform coinage” of British India itself (which began in 1835). These restrikes have led to a vast pool of collectible coins. The three-part auction of the David Fore Collection of British Indian Coins and Restrikes in 2013 by A.H. Baldwin & Co., along with the late 2012 publication of a book based in part on the Fore Collection, has heightened market interest in the series.

According to Album, an expert on Indian coins, it is very rare to encounter Bombay Mint originals or restrikes, and more rare to find them as part of an intact set with the original case of issue. Inside the case is a gold embossed image of the Imperial State Crown and inscription reading H.M. BOMBAY. The box appears to have been manufactured at the end of the 19th century.

The Uniform Coinage of India 1835 to 1847, a Catalogue and Pricelist, by Paul Stevens and Randy Weir and published by Spink, does not list early Proof restrikes or original Proofs for either the 1879 mohur or 10-rupee coin. The sole example of an early Proof restrike of the 1879 5-rupee piece is in the British Museum.

“We know of no other set in existence,” Album said.

Proof examples have been “produced and reproduced in different circumstances and in different quantities and qualities throughout the period 1835 until about 1970,” according to the Stevens-Weir book.

The practice of striking or, more commonly restriking, Proof examples of circulating coins, however, has origins in official use. Restrikes were often produced for presentation to government officials, according to the book, and are often listed as “original Proofs” when being sold.

Another classification of Proof restrikes comprises those restruck somewhat contemporaneously with the issuance of the original coins to satisfy collector demand. These are generally classified as “early Proof restrikes.”

The final category is simply called “Proof restrikes,” and generally refers to examples struck in later years (as recently as 1970), also to satisfy collector demand.

The auction offers 2,470 lots of ancient, Indian and Islamic coins, military orders and medals. View the full catalog online at www.stevealbum.com, telephone the firm at 707-539-2120 or email it at joe@stevealbum.com. ¦