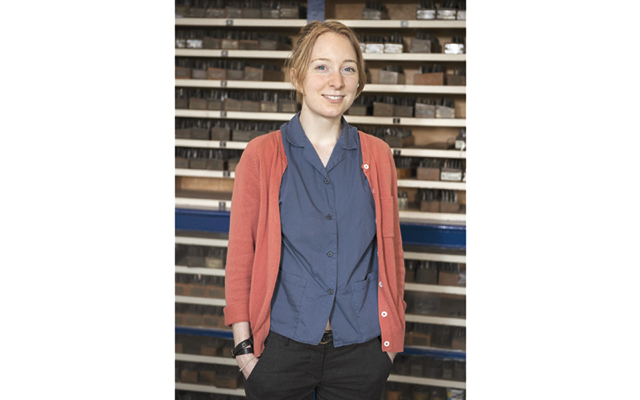 Image courtesy of The Royal Mint

Britain’s best "New Medallist" has won the rare opportunity to spend one week at the Royal Mint perfecting her art and transforming her creative conceptual ideas into tangible design pieces.

The annual initiative, now entering its 10th year, is organized by the BAMS in association with the V&A Museum, the British Museum, and the Royal Mint, and is supported by the Brian Mercer Charitable Trust.

The New Medallist program is designed to stimulate the field’s originality and provide artists who are new to medal-making with the opportunity to develop their interest, expand their knowledge and gain invaluable experience in medal-making, in order to help them shape the future of British art medals.

The winning artist of the New Medallist program secures a place in a medal-making course at a college overseas, or an international medal workshop, for at least three weeks to gain a greater understanding of contemporary thinking on medals.

The artist then undertakes a one-week placement with the British Museum or the V&A Museum, before finishing the final week of residency in the engraving department of the Royal Mint. The aim of this placement with the Mint is to allow the artist to work alongside experienced medal-makers and have the opportunity to experiment with various techniques, including the use of computer-aided reduction machines.

Poulter graduated from the Ruskin School of Drawing and Fine Art specializing in video on a BFA Fine Art before completing an masters of art degree in sculpture at the Royal College of Art last year.

As part of her masters of art course Poulter was challenged with the task of casting an art medal in bronze, and it was this piece that she ultimately submitted as part of her portfolio application for the New Medallist program.

Poulter admits that she never thought she would win with the first medal she ever made, but was thrilled to discover that she had been selected to act as an ambassador for the BAMS program and have the chance to work and develop her skills under the guidance of experts.

“Making a medal presented me with a new medium for transforming a concept into reality using little more than a single mark made by a traditionally shaped tool and the relationship that each face has to the other,” Poulter said. "To me, art medals offer a contemporary means to express two opinions or show different interpretations of an argument. ... I’ve found in my year that the medal is a curious medium with a fascinating history and with more diversity than one might initially think.”

Before commencing her work placement with the Royal Mint, Poulter considered concepts for her next medal and how she could utilize the cutting edge technology and the facilities at her disposal to make this concept a reality.

“I have a work space in London and occasional access to the foundry at the Royal College of Art, so I have been able to continue my own projects and develop my activities as an artist. There are a few things that I am making at the moment, but the key piece I have been working on at The Royal Mint is a representation of the world.”

She said the work is based on an illustration she found online that indicates that the world is spherical, but is depicted in a flat format.

"I like this juxtaposition and the idea of replicating it with a medal,” Poulter said.

The Royal Mint’s product designer and engraver Thomas Docherty was responsible for mentoring Poulter during her placement with the 1,100-year-old Mint, which currently designs and manufactures coins and medals for more than 60 different countries.

“It has been our honor to support the New Medallist scheme for the last seven years and have the opportunity to work with the winners, helping them to progress their ideas and develop their medal making abilities,” Docherty said. "Claire is clearly a very talented artist with a flair and enthusiasm for creating medals, and it was a pleasure to work with her for the week. We look forward to seeing how her career as an artist progresses.”

BAMS president Philip Attwood said: “Our society was founded in 1982 to promote the art of the medal through commissions from a wide range of artists, including internationally recognized sculptors and recent art college graduates. The New Medallist scheme is intended to provide a framework by which artists based in Britain and Ireland who are relatively new to medal-making can develop their interest in the medal as a vehicle of artistic expression. Its aim is to deepen and broaden the selected artists' knowledge of the medal and expand their awareness of the medium's possibilities. Their work breathes new life into the centuries-old art of the medal.

“We are very pleased to have worked with The Royal Mint and had the support of their expert medal-makers and engravers for the last eight years on this initiative. Each of our winners has benefitted greatly from the time that they have spent with the organization.”