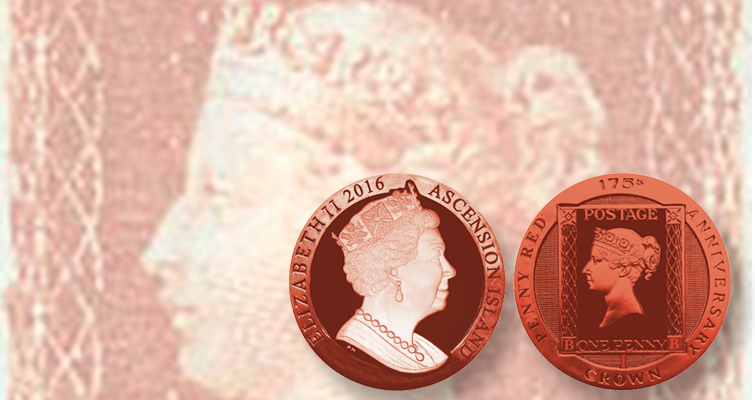 The Pobjoy Mint is celebrating the design by issuing a red colored coin, part of a series of colorful coins honoring famous stamp designs, like the Penny Black and Two Pence Blue stamp.

The Penny Red British postage stamp was first issued in 1841, making 2016 the 175th anniversary of its release.

The color was changed from black to red because of difficulty in making a visible cancellation mark on the Penny Black — the red made a mark much more visible. It was essentially introduced to combat fraud but, consistently, it continued to be the main type of postage stamp in the United Kingdom from its release until 1879.

More than 21 billion examples of the Penny Red were printed over the course of more than 38 years, making it the world’s most-used stamp in the early classic period. It was also Britain’s longest-running stamp issue in everyday use, and remains possibly also its most collected and best studied.

To celebrate the milestone anniversary, the Government of Ascension Island approved the release of a special red coin depicting the Penny Red stamp on the reverse in a “pearl-effect red finish,” according to the Pobjoy Mint.

The obverse of the coin carries a special effigy of Queen Elizabeth II used exclusively by Pobjoy Mint.

Both coins weigh 28.28 grams, measure 38.6 millimeters in diameter, and are encapsulated in an acrylic capsule for protection, housed in a red box with a certificate of authenticity.

The colorful coin has a mintage limit of 5,000 pieces and retails for $75. 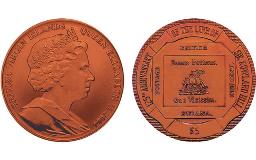 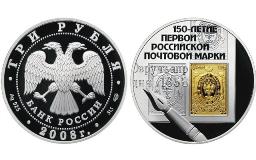 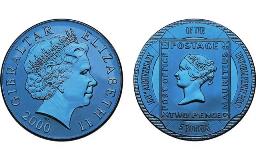