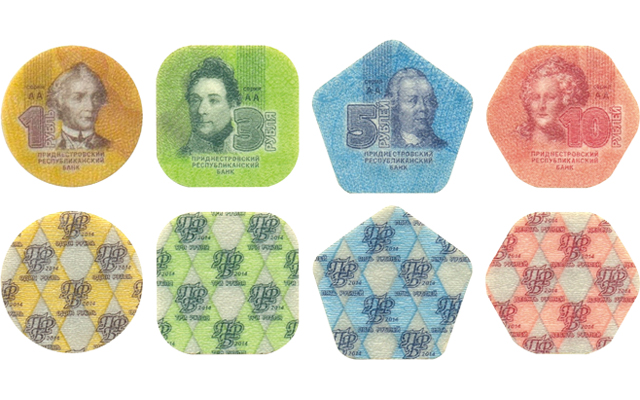 A new series of coins from the breakway republic of Transnistria are made from plastic. Denominations range from 1- to 10-rubles, and the colors and shapes of the coins vary.

The old question of “paper or plastic” is getting a bit complicated in one Eastern European enclave.

The breakaway state of Transnistria (also called Trans-Dniestr or Transdniestria) in eastern Moldova on the Ukrainian border is now circulating “composit” or composite coins, according to the Trans-Dniester Republican Bank.

Transnistria is located mostly between the River Dniester and the eastern Moldovan border with Ukraine. Since 1991, Russian troops have been stationed there supporting the population, which is composed mostly of Ukrainians and Russians, but with a sizeable ethnic Moldovan minority.

The republic is not recognized by United Nations member states, but has its own government and national symbols, including postage and currency.

The round 1-ruble coin is yellow-brown and measures 26 millimeters in diameter. The coin shows Alexander V. Suvorov, a military leader famed for never losing a battle despite being constantly outnumbered.

The rounded-square 3-ruble coin is green and also has a diameter of 26 millimeters. Pictured on the 3-ruble coin is Franz Pavlovich De Volan, a military engineer serving Suvorov. De Volan helped plan the city of Odessa, where a museum is named after him.

Pyotr A. Rumyantsev-Zadunaisky, one of the great Russian generals, who served during the reign of Catherine II (the Great), appears on the 5-ruble coin. The pentagonal 5-ruble coin is blue and measures 28 millimeters in diameter from top to bottom.

Catherine the Great appears on the reddish-orange 10-ruble coin, which is hexagonal (six-sided) in shape. It also measures 28 millimeters in diameter, from opposite vertices.

One U.S. dollar is equivalent to about 11 rubles in Transnistria.

No information about the coins’ weights or mintages was available from a Bank spokesperson, who referred to a specific page on the bank website to answer all questions, including what materials compose the composite used in the coins.