Brazil to issue its first Olympic coins for 2016 Summer 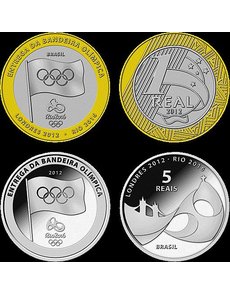 Brazil will mark the arrival of the Olympic flag following the London 2012 Games with a circulating ringed bimetallic 1-real coin, left, and a collector silver 5-real coin, right.

All images courtesy of the Banco Central de Brasil.

When the London Olympic Games are over, the Royal Mint won’t be the only issuer of coins to celebrate the handover of the Summer Games to Rio de Janeiro for 2016.

Brazil’s central bank on Aug. 1 announced that it would release circulating commemorative 1-real coins as well as noncirculating legal tender silver 5-real coins “to honor the delivery of the Olympic Flag to Brazil,” in a venture involving three entities, the Rio 2016 Olympic and Paralympic Games Organising Committee, the nation’s central bank and the Casa da Moeda (Brazilian Mint).

The circulating 1-real coin is a ringed-bimetallic coin, with a stainless steel center and a bronze-plated steel ring.

An Olympic flag with the five Olympic rings stands as the central device, with BRASIL in the field above and the logo of the Rio 2016 Games appearing in the field below the flag. Legends found on the outer ring of the coin translate to “delivery of the Olympic flag,” and “London 2012 • Rio 2016.”

The reverse is the standard design for the denomination, showing native marajoara art in the outer ring and, in the center, the Southern Cross constellation (from the nation’s flag), and the denomination and year of issue.

A total of 2,016,000 1-real coins will be produced, with an unspecified number to be issued in special packages for collectors and the rest put into circulation through the banking system.

The 1-real coin weighs 7 grams and measures 27 millimeters in diameter.

A total of 5,000 of the silver 5-real collector coins (finish unspecified) will be issued, according to the bank announcement.

The central obverse elements on the 5-real coin are the same as on the 1-real coins, though the higher denomination lacks the legend references to London and Rio. The reverse shows stylized images of two icons, the Tower Bridge of London and the “Cristo Redentor” (Christ the Redeemer) statue representing the city of Rio de Janeiro. The denomination and legends referencing the two cities appear on the reverse.

No specification details were available at this time for the silver coin, and a release date was not announced.

Brazil coins have no known U.S. distributors, and the United States Olympic Committee has jurisdiction over sales of Olympic-themed coins in the United States, so collectors will have to wait for a distributor to be named or seek these coins on the secondary market. ¦