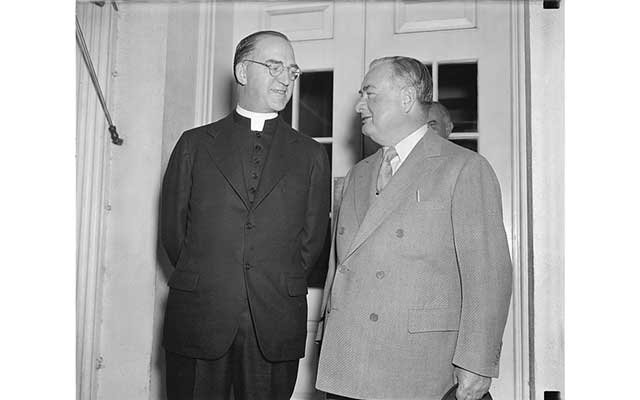 Father Edward Joseph Flanagan visits the White House, during the Franklin D. Roosevelt administration. He is shown accompanied by Joseph Keenan, the Assistant to the Attorney General, in this Oct. 13, 1938, photograph. Image courtesy Library of Congress.

The Boys Town Centennial Commemorative Coin Act was signed into law by President Barack Obama on July 6 after being passed by both the House of Representatives and the Senate. It was presented to President Obama on June 26.

The bill, H.R. 893, was introduced in the House by Rep. Jeff Fortenberry, R-Neb., on Feb. 11 and passed the House on June 23. The House bill then passed in the Senate without amendment by unanimous consent on June 25.

A companion bill, S. 301, was also introduced in the Senate and it had passed in that chamber by unanimous consent on March 25.

The law authorizes three different 2017 commemorative coins — up to 50,000 gold $5 half eagles, as many as 350,000 silver dollars and not more than 300,000 copper-nickel clad half dollars in Proof and Uncirculated finishes.

Boys Town is a nonprofit organization dedicated to saving children and healing families, developed from Father Flanagan’s Boys Home, which Father Edward Flanagan founded on Dec. 12, 1917. Its stated mission is: “Changing the way America cares for children, families and communities by providing and promoting an Integrated Continuum of Care that instills Boys Town values to strengthen body, mind and spirit.”

The designs are to be emblematic of the 100 years of Boys Town, one of the largest nonprofit child care agencies in the United States, and will be selected by the secretary of the Treasury, after consultation with the National Executive Director of Boys Town and the Commission of Fine Arts as well as review by the Citizens Coinage Advisory Committee.

Surcharges of $35 per $5 coin, $10 per dollar and $5 per half dollar are to be paid to Boys Town to carry out Boys Town’s cause of caring for and assisting children and families in underserved communities across America.

Rep. Fortenberry spoke before the House in support of the legislation on June 23. He stated: “Boys Town offers a remarkable model of academic and spiritual engagement. Students learn more than math and grammar; their teachers and caregivers provide them with solid formation. Graduates are equipped to succeed not only professionally, but are also given the life skills to stay on the right path. Boys Town is so impactful that about 90 percent of the children integrate successfully back into their communities.”

A previous version of this legislation was introduced in the previous House of Representatives by Rep. Lee Terry, R-Neb., on July 30, 2013. Although it was passed by both chambers on December 15, 2014, it was passed in non-identical forms and the differences were never resolved.