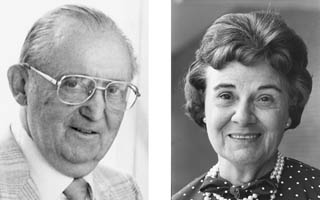 The history of the Central States Numismatic Society is captured in a new book that will be released during the society's 75th anniversary convention in Schaumburg, Ill., April 23 to 26. The late Harry X Boosel and Marjorie Owen Hendershott are just two of the society's former officers who contributed to the society's growth.

Compiling the history of any organization can be taxing but also very rewarding, as Ray Lockwood can attest.

Lockwood just completed his History of the Central States Numismatic Society. The book will be released at the CSNS 75th Anniversary Convention in Schaumburg, Ill., set for April 23 to 26.

The book covers the history of CSNS from its beginning in 1939 through to 2014.

“Many people, past and present, are mentioned throughout the book,” Lockwood writes. “After all, the history of any organization is the story of people who have contributed in a wide variety of ways.”

Mentioned here are only a few of the society’s stalwarts:

? Harry X Boosel, a collector of Proof coins and a longtime CSNS official, was in attendance at the 1940 CSNS convention. Boosel devoted so many years to the study of 1873 coins and their history that other numismatists crowned him “Mr. 1873.”

? In 1976, Marjorie Owen Hendershott was elected CSNS secretary-treasurer. She and her first husband, Lowell Owen, were lifelong collectors and active members of CSNS. He died in 1976 and in 1983 she married Robert L. Hendershott, whom she met through their mutual interests in collecting. She served in a variety of offices for the society and became its first female president in 1991.

The book is available in hardcover for $30 postpaid and soft cover for $6 postpaid.

Checks should be made out to CSNS and sent with orders to Ray Lockwood Education Director, Central States Numismatic Society, 2075 E. Bocock Road, Marion, IN 46952.

Books will be autographed upon request and be available for pickup at the convention or mailed if requested.