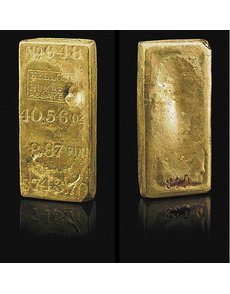 A Kellogg & Humbert gold bar, recovered from the shipwreck SS Central America, will hit the auction block in a Sept. 2 Bonhams auction.

Auction house Bonhams of Los Angeles will be offering several California Gold Rush rarities in its Sept. 2 Los Angeles sale, including a Kellogg & Humbert gold bar and two gold $20 coins from the SS Central America, known by many as the “Ship of Gold.”

The SS Central America sank during a hurricane off the coast of North Carolina Sept. 9, 1857. The shipwreck was discovered by the Columbus-America Discovery Group on Sept. 11, 1988, and recovery operations of its cargo of gold bars and coins began in 1989. The gold, silver and other artifacts recovered weighed more than a ton.

The Kellogg & Humbert gold bar recovered from the wreck, Lot 1275, weighs 40.56 ounces and includes a certificate of authenticity from the Columbus-America Discovery Group. Bonhams gives the bar an estimated sale price of $120,000 to $140,000.

An 1857-S Coronet gold $20 double eagle recovered from the Central America, Lot 1116, is also a featured item in the auction. Bonhams states that the coin, graded Mint State 66 by Professional Coin Grading Service, has “exceptional eye appeal and lively orange and olive highlights.” The coin is estimated to sell for $30,000 to $35,000.

Lot 1117 is a second 1857-S double eagle recovered from the Central America, also graded MS-66 by PCGS. It is described as having “blazing, softly frosted surfaces and handsome rose-gold color.” Bonhams also gives this coin an estimate of $30,000 to $35,000.

Paul Song, director of the Rare Coins and Banknotes Department at Bonhams, said: “Bonhams is delighted to offer such rare and unusual pieces related to the Gold Rush. It is the perfect homage to the era and our corporate roots in San Francisco during that time period. We look forward to continuing success in this arena.”

Additional pieces from the Gold Rush era include two rare uncertified examples of the 1915-S Panama-Pacific International Exposition gold $50 commemorative coins. A total of 1,027 round and 864 octagonal coins were melted, leaving net mintages of 483 and 645 pieces, respectively.

Bonhams offers an illustrated auction catalog of this sale for review online at www.bonhams.com/uscoins.

For further information on how to bid in this auction and for more about other auctions of interest, write to Bonhams, 7601 Sunset Blvd., Los Angeles, CA 90046. Contact the company by telephone at its Los Angeles office at 323-850-7500, email Bonhams at info.us@bonhams.com or visit the firm’s website at www.bonhams.com. ¦