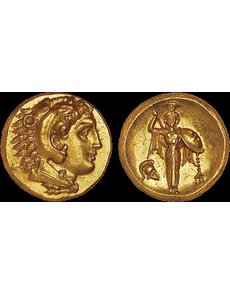 One of only three examples known of a gold rarity from ancient Greece highlights the Meyer & Ebe Collection of Ancient Greek Coins, offered Jan. 6 at auction by Bonhams.

The marquee item in the 110-lot collection from a private collector built over the past decade is the “exceedingly rare” circa 336 B.C. gold stater of Pergamon in Mysia. The obverse portrait depicts Herakles, the son of Alexander, wearing a lion skin.

The example in the auction is in About Uncirculated to Uncirculated condition, though it has “a few microscopic handling marks” on the reverse. It has an estimate of $115,000 to $125,000.

The auction is scheduled to be held in the firm’s New York City location, while the New York International Numismatic Convention is under way, but the auction is not officially linked to the show.

Paul Song, director of the rare coins and bank notes department at Bonhams, said, “Different regions of Classical Greece and numerous design types are well represented throughout the collection, and with the recent strength of the ancient Greek coin marketplace, we anticipate a very strong sale.”