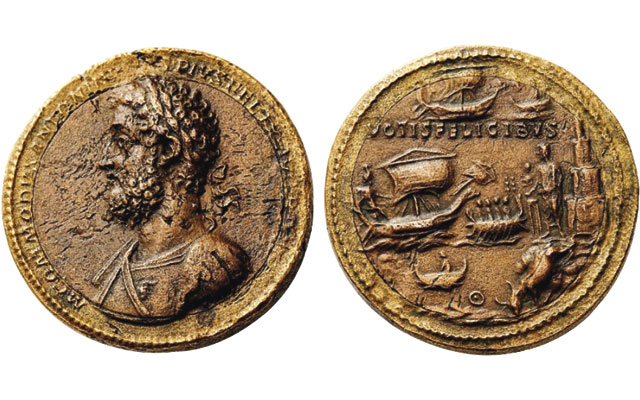 An ancient ringed-bimetallic medal, issued circa 190 A.D. by Roman emperor Commodus, has a copper ring and orichalcum center.

But long before the late 20th century, ancient medals were struck from copper and orichalcum (a bronze alloy that sort of resembled gold).
An example of a medal dating to A.D. 190 highlights Nomos Ag’s auction No. 9 on Oct. 21 in Zürich.

The circa Jan. 1, 190, medal was issued by Commodus and struck in Rome.

It measures 41 millimeters in diameter, or about the diameter of an American Eagle 1-ounce silver bullion coin, but weighs 60.1 grams, nearly twice as much as the American bullion coin.

The medal was issued for the New Year of 190 and celebrates the relief of the famine that plagued Rome in 189. It shows the ruler on the obverse and a harbor scene on the reverse.

Graded About Extremely Fine by the auction firm, the coin exhibits the “typical roughness” of “Tiber patina,” a term collectors use to indicate the bronze look of a coin recovered from a river deposit, even if the coin described was not found in a river.