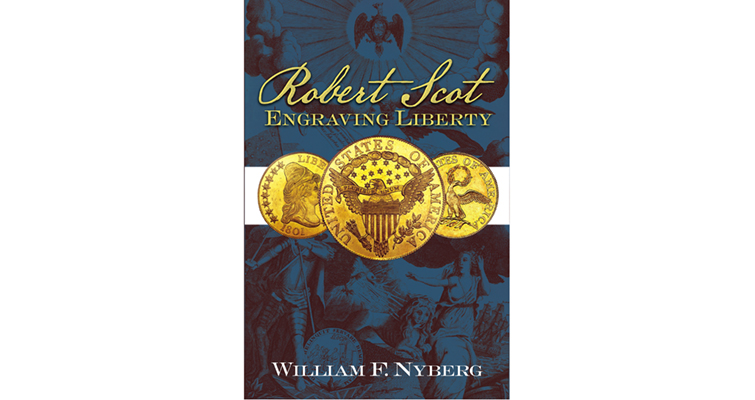 William F. Nyberg's years of extensive research culminate with the release by American History Press of Robert Scot: Engraving Liberty, a biography on the life and work of the first chief engraver of the United States Mint.

Robert Scot was without doubt the most prolific of Colonial American engravers. His patriotic symbols inspired sentiments of rebellion, unity and liberty throughout the Revolutionary period and on into the early 19th century. His highly skilled engravings depicted important historical events, such as a detailed map of the Siege of Yorktown, and included the original design for the Great Seal of the United States, various medals, coins and paper currency.

In addition, the first encyclopedia published in America was enhanced by his superb scientific engravings. Until now, despite his significant achievements, this friend of the Founding Fathers has largely remained unknown to both historians and the general American public. William Nyberg’s extensive research of Scot and his world now allows his story to be told for the first time.

This enthralling biography justifiably places Robert Scot among the most important and influential of early American artists.

“A superb work and important contribution to the study of early American numismatics. Nyberg's engaging narrative, built upon hundreds of primary sources, is equally authoritative and readable. A complete examination of Scot's engraving work, including coins, medals, paper money, seals and revenue stamps, is long overdue, and Nyberg is fully up to the task.”  — Leonard Augsburger, co-author of The Secret History of the First U.S. Mint.

About the Author: William F. Nyberg is a member of the Historical Society of Pennsylvania, the Library Company of Philadelphia, and the American Numismatic Association. He learned the lost art of silversmithing at the Pratt Fine Arts Center. He has an MBA from Seattle University, works in the aerospace industry, and is a member of the Institute of Industrial Engineers. He has previously published articles of numismatic research in the John Reich Journal.