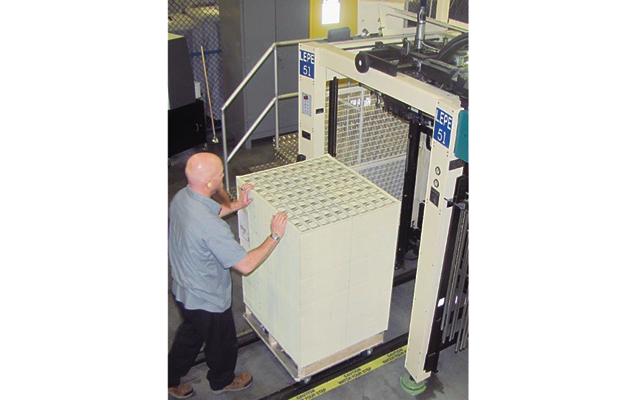 Large Examining and Printing Equipment assistant pressman Chris McCuiston loads 50-subject sheets of Series 2013 $1 FRNs into a LEPE machine at the Bureau of Engraving and Printing's Western Currency Facility in Fort Worth, Texas. 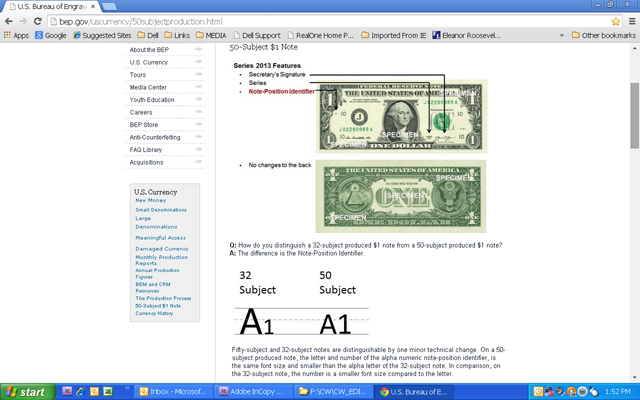 This image from the Bureau of Engraving and Printing's website shows the size of the alpha-numeric combinations printed on the 32-subject sheets compared to those on the 50-subject sheets. 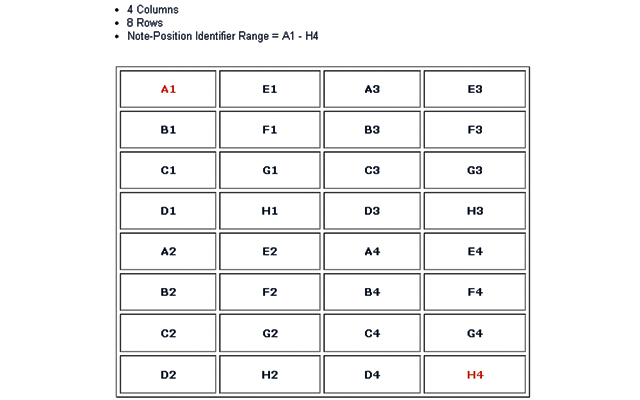 Here is the configuration of four columns and eight rows for the 32-subject sheets (A1 to H4). 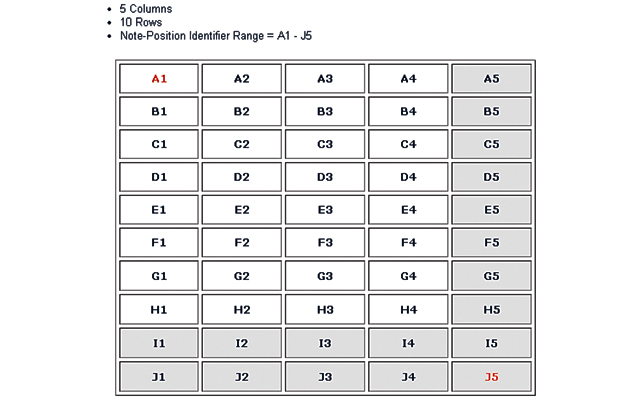 Collectors can be on the lookout for the first U.S. paper money printed on 50-subject sheets to be released into circulation — Series 2013 $1 Federal Reserve notes.

The shipment in April of notes from 50-subject sheets rather than the 32-subject sheets introduced in the 1950s is the culmination of more than a decade of testing and experimentation by the Bureau of Engraving and Printing.

When exactly collectors should be seeing the notes is not clear, however.

“The time it takes the new series notes to get into circulation will depend on inventory levels of existing $1 FRNs at Federal Reserve Banks and the policies of each depository institution,” according to a spokesperson for the Federal Reserve Board.

The Series 2013 $1 FRNs were printed for the Kansas City, Dallas and Cleveland Federal Reserve Banks.

When the new notes do begin to circulate they will likely draw the intense interest of many paper money collectors; $1 Federal Reserve notes have been a collector favorite since the first ones were introduced in 1963.

The Series 2013 $1 FRNs were printed on 50-subject sheets on Super Orloff Intaglio presses. Series 2013 notes all have the facsimile signatures of Treasury Secretary Jacob “Jack” Lew and Treasurer of the United States Rosa “Rosie” Gumataotao Rios.

For the immediate future, collectors may have to be satisfied with collecting individual 50-subject $1 notes from what they can find in circulation. Currently the BEP has no plans to sell 50-subject uncut sheets of notes. The bureau does sell sheets of older $1 notes, including partial sheets and full 32-subject sheets.

The note-position identifier has long enabled collectors to plot any given note’s original position on the 32-subject sheet from which it was cut. The identifier will continue to serve that same function for notes from 50-subject sheets, although collectors will now have to adjust to a new configuration of notes on the larger sheets.

The BEP began printing notes in sheets of 32 subjects in 1957, when the switch was made to a new type of press using a dry paper printing technique. Before that, the BEP printed notes on wet paper, with fewer notes to the sheet than found today.

In the early 21st century, the threat of counterfeiting prompted the BEP to begin exploring new printing presses capable of printing a variety of sophisticated security features.

In 2005 the BEP began installing and testing the state-of-the-art SOI printing presses.

The presses, made by KBA Giori Inc. in Switzerland, can produce 10,000 50-subject sheets per hour. The older I-10 presses used at the BEP produce 32-subject sheets. Other major security note printers around the world use the newer, super-size printing equipment.

The new SOI presses have three plates; a computerized ink control system that allows for precise control of the amount of ink, thus providing a cost saving to the BEP; and an electronic inspection system.

The SOI presses can handle intricate anti-counterfeiting devices not possible on the BEP’s older presses. The introduction of these presses started the BEP on the journey of developing automated electronic inspection and finishing systems.

Both BEP production facilities, at the headquarters in Washington, D.C., and the Western Currency Facility in Fort Worth, Texas, have SOI presses in place.

The $1 Federal Reserve note is only the first denomination that will be printed on 50-subject sheets.

According to BEP officials, “It will take many years to completely transition to 50-subject production.”