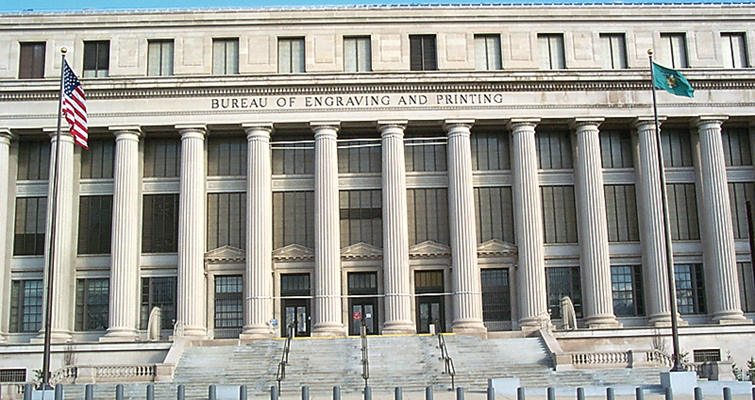 The Bureau of Engraving and Printing could get a new headquarters and primary printing facility if Congress approves.

After 104 years in the same building, if Congress grants its approval, the Bureau of Engraving and Printing will get a new, modern money factory in the Washington, D.C., area.

The details are presented in a 32-page report to Congress from the U.S. Government Accountability Office. The GAO report was necessary because, while the BEP can renovate an existing facility with its own funds, it needs congressional authorization to purchase land and build a new facility.

A new production plant is needed, according to the report, which recounts numerous problems if the status quo remains in place. Most important is the realization that the demand for paper currency is not going to decline significantly in the next decade.

The number of bank notes in circulation increased by 43 percent from 2008 to 2016. The number of ATMs is growing, and cash still accounts for 32 percent of all transactions, and half of those under $25. The report says that the Federal Reserve System and Treasury Department predict a continued rise in the demand for cash over the next 10 years.

A contrast with current operations at the one-floor production facility in Fort Worth, Texas, demonstrates that the current Washington operation is inefficient and excessively costly. When the Fort Worth plant opened in December 1990 it was meant to handle about 25 percent of total production. In the 2016 fiscal year the Fort Worth facility’s portion of production had risen to 58 percent, with the balance from Washington, even though the latter has more employees. Costs of production are also considerably higher in Washington. In 2016, $1 and $20 notes cost 23 percent and 7 percent more, respectively, to produce in Washington than in Fort Worth. The report accounted for this as it describes a production process in Washington involving multiple floors and multiple building wings.

“In Fort Worth, because the production occurs in one large room on one floor, these processes occur in adjacent spaces on the same floor. As a result, according to BEP, notes travel more than twice as far during production in the D.C. facility,” the report recounts.

The GAO detailed several options in its report:

??A major renovation of the current facility. This could be done by the BEP without congressional approval.

??A new building in another location for both production and administrative functions.

??A hybrid plan, meaning a new building in a new location for currency production, while administrative activities would remain in one of the current buildings in Washington.

Studies and research show the least expensive option to be a new building, similar to the one in Fort Worth, with a single floor and a secure perimeter compliant with current standards. Despite the cost difference, BEP prefers the hybrid option. The report indicates the BEP’s preference is to remain in the Washington area, but it would agree to the construction of a new facility in a different location if necessary.

The hybrid option would cost about $1.4 billion. BEP Director Leonard R. Olijar explained in a letter attached to the report why the bureau favors the hybrid approach. He said building a new production facility in the Washington area while renovating administrative space in the current building would save federal costs, allow for a secure perimeter that met federal standards, and improve efficiency by allowing production with modern processes and equipment on a single floor.

He stressed, however, that “the current production environment in the facility is inadequate to meet the challenges of counterfeit deterrence and complete the robust annual currency order … while maintaining or surpassing world-class quality currency note standards.” He added that a near-term decision is needed, and if none is forthcoming, the BEP would have to begin a costly and inefficient large-scale renovation of its existing building in southwest Washington.

The BEP indicated it needs a decision by the end of 2018. If a new printing facility is not authorized, GAO says that renovation of the current D.C. facility is estimated to cost $2 billion. This is the most expensive and lengthy of the three alternatives.

Complicating any renovation plans, both the Washington facility’s 104-year-old main building and an 80-year-old annex are designated as historic, so revisions to them would be subject to requirements of the National Historic Preservation Act.